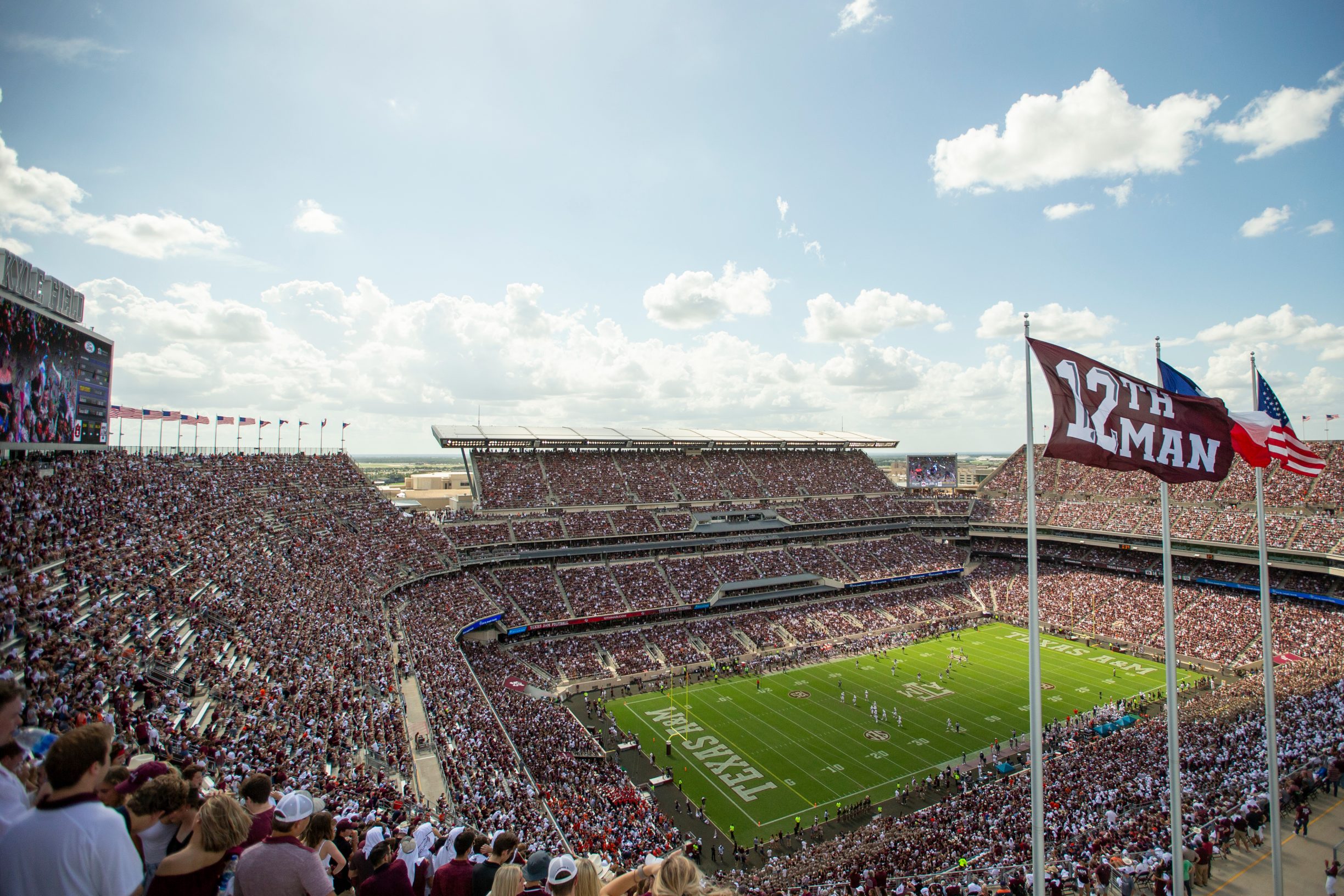 Located in the heart of the Houston-Dallas-Austin triangle, within a two-hour drive of most of the state’s 28 million residents, Texas A&M's main campus in College Station is home to more than 62,500 students. Another 5,700 are at branch campuses in locations across Texas – and as far away as Qatar.

With 133 undergraduate degree programs, 175 master's degree programs, 92 doctoral degree programs and five “first-professional” degrees as options for study, Texas A&M and its "Aggies" — the university's students, graduates, staff and sports teams — are a driving force for research and education within the Lone Star state.

And just as impressive as the university's academic accomplishments is the school's long tradition of developing and supporting championship-level athletics. With Texas A&M Aggies football at the heart of the program, the university supports a full athletic lineup that includes football, men's and women's basketball, baseball, softball, soccer, volleyball, track and field, golf, tennis, swimming and diving, equestrian events and more.

The group has taken home multiple awards over the years, including an SVG award in 2013 for the "Welcome to the SEC" series. 12th Man Productions was also honored for their part in the successful 2012 Heisman campaign for Johnny Manziel and was the 2018 winner of the Sports Video Group (SVG) and National Association of Collegiate Directors of Athletics Administration (NACDA) Technology Leadership Award.

The 12th Man team, which includes 18 fulltime staff members and up to 90 Texas A&M undergraduate students, moved into an all-new facility at the south end zone at redeveloped Kyle Field in 2015. The new facility was created with a nearly $12 million investment in the electronics infrastructure to serve Texas A&M athletics.

With the Kyle Field renovation, the team began moving toward an IP infrastructure for their audio network. The team designed a system comprised of manufacturers and technologies, including JBL and Harman loudspeakers, Soundweb BSS systems, Yamaha CL boards, and RIO 32 Dante stage boxes.

In total, the new infrastructure has 48 fiber optic runs that tie the Kyle Field control center to the school's seven main sports venues. Over the last few years, they have been working to control all venues from the centralized area.

"When we started the renovation, we had to choose our audio network platform, and it was obvious that Dante fit our immediate needs and was also supported by the industry enough to cover our future plans," said Bacon. "We definitely have an extensive Dante deployment, and we're trying to grow it as much as possible. It's a great technology, and we can vouch for its flexibility and how using the IP infrastructure allows us to do a lot of things we wouldn't otherwise be able to do."

Bacon explained that as a centralized facility, audio from all facilities is transported to the production control rooms via Dante, and nearly all audio for broadcast is on a Dante network as well. The team produces everything essentially through Dante with Yamaha consoles. The audio signals are mixed, married to the video, and then either used within the venue or broadcast out. The team also has a direct fiber connection to ESPN, allowing them to share audio and video content directly.

"We have four control rooms, so we're able to do two sports at a time," said Bacon. “That means two big-screen shows and two ESPN broadcasts simultaneously, so things can get pretty hectic — and we're relying on Dante more and more so we can be as efficient and responsive as possible."

Recently, the team upgraded their Studio Tech 214 announcer consoles to be Dante native, instantly improving audio quality and signal flexibility. Instead of multiple analog/digital conversions with the old process, now the signal is native Dante straight from the announcer console to the audio mixer.

The team has also integrated this type of Dante connectivity into their intercom system and are able to directly patch the announcer consoles into the intercom system as well as the audio mixer. Now, when they need to feed audio in and out of the intercom, they can do it straight through the Dante network and into whatever source or destination desired.

Bacon said each sports venue has its own PA system and the team is working to bring all venues onto the Dante network, and into Dante Domain Manager. Currently, the 103,000 seat Kyle Field football stadium and the production facility are completely Dante networked. The basketball and volleyball arena is next.

In the case of the football stadium, the PA system consists of both the main bowl, which is the public area with the main PA system, as well as entryways, premium spaces, concourses, and restrooms. The stadium's back-of-house and front-of-house audio is all the same network, and it's all distributed through Dante, and managed with Audio Architect and Dante Domain Manager.

"There are multiple ways we could get it into Dante and to the PA mixer, but we run it through our console and do direct out, then we set up the shared audio group within Domain Manager," said Bacon. "Then we just do the patching in the Dante Controller, and as long as we have the network infrastructure set up, everything just works."

The PA systems are distributed audio DSP networks that are all interconnected by Dante because of the large distances covered. The Dante network delivers the signal to a network of Harman London BLU DSPs, and from there to the individual amplifiers.

"With Dante Domain Manager in the football stadium, we've already seen the benefits integrating the PA and being able to send multiple sources to the PA mixing console, as opposed to previously, we would only be able to send two," said Bacon. "We're currently working with and sending about six audio signals, but we can obviously send a lot more. This has been a very convenient and efficient way for us to improve our workflow to make sure we're getting audio to the PA and the football stadium so that the show can go smoothly, and everybody can hear it cleanly."

Dante Domain Manager is network management software that enables user authentication, role-based security, and audit capabilities for Dante networks while allowing seamless expansion of Dante systems over any network infrastructure. Dante Domain Manager organizes a network into zones called "domains" that each have individual access requirements, making it clear and easy to know who can access any area of the system. All activity is logged, tagged, and date-stamped so problems can be quickly identified and solved.

With Dante Domain Manager, Bacon and the 12th Man Productions team is able to route their audio signals across subnets to cover the multiple venues and the production areas. Donte Domain Manager enables the team to create management groups and to segment areas, venues, subnets, and production rooms as needed. The team is now able to create some very granular control and security parameters across the network.

"Our student workers do many functions for us, everything from operating cameras to post-production, and we have about 20 student engineers as well who are out in the field making sure everything is working and are actually connecting everything and mixing the shows," said Bacon. "Our student engineers are trained on Dante Domain Manager, and they now do the routing and patching for the various productions, and we don't want operators mistakenly going into Dante Controller and re-routing anything that might impact other simultaneous events."

"Dante Domain Manager gives us detailed audio network control and excellent protection," added Bacon. "I can set up user accounts for students, which allows them to only have access to the things they need. This has taken some of the load off of me and the other full-time engineer, and it allows us to delegate functions without worry — it's been hugely beneficial for us."