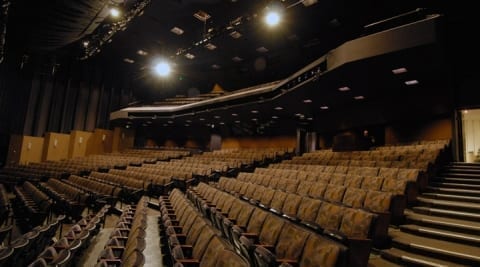 Founded in 1968, The Alliance Theatre at Woodruff Arts Center remains closely tied to the cultural identity of Atlanta, growing as the city has grown. The theatre has gained national recognition and prominence as Atlanta has become a leading international city. The Alliance Theatre strives to set the highest artistic standards and create the powerful experience of shared theatre for a diverse audience. Above all else, the Alliance Theater values excellence, pursued with integrity and creativity, and achieved through collaboration.

“Dante is incredibly easy to use. It’s about the most simplistic cabling you could hope for. One cable from the computer to the mixing console and it carries all your audio and control traffic. It really doesn’t get any simpler than that.”

Clay Benning, Resident Sound Designer at the Alliance Theatre, was looking to the future as he contemplated upgrades to the theater’s audio infrastructure. The theatre was also preparing to update their computer network to gigabit fiber, and so Clay began to investigate audio over Ethernet solutions.

Theatre productions nowadays rely upon computer technology to create and deliver sounds crafted for live performance. Like many theaters, the Alliance had standardized on the popular QLab solution for Mac OS X by Figure53 Software.

Initially Clay was disappointed to find that many of the legacy solutions such as Ethersound and CobraNet were proprietary and not compatible with regular standards-based IP networks. They could not be used on the same network as the theatre’s computers, which meant that computers running QLab would be relegated to analog feeds, a sub-optimal solution that all but ensured that more expensive upgrades would be required.

The Mac Mini computers at the Alliance were already connected to the theatre’s network. Clay thought that there must be some solution that would work with this already existing, robust connection, and he was right; Clay found Dante. As a technology enthusiast, Clay recognized that a solution built upon proven IP standards was the only “future-proof” path to take over the long haul, and that Dante’s commitment to AVB compliance guaranteed further improvements in performance and compatibility over time.

After speaking with his Yamaha representative, Clay purchased the Dante MY16-AUD for the theatre’s Yamaha DM1000 mixing console. Installation was fast and easy.

Key to Clay’s decision is Dante Virtual Soundcard, software from Audinate that allows any Mac or Windows PC to become a full fledged Dante device on a network. Using only the built-in Ethernet connection on the theatre’s Mac Minis, audio from QLab is streamed over the theatre’s network to the Dante MY16-AUD in the DM1000 and from there out to the theatre audience. There is no need for additional hardware or tower computers to host that hardware.

“Because we can soft patch channels of audio between devices using Dante Controller” says Clay, “when we reconfigure our equipment between shows it’s not a matter of plugging and re-plugging and running new cable; it’s simply a soft patch update to route the new channels of audio to show up wherever we want on the devices on the network.” He adds, “To me it’s inherently cool!”