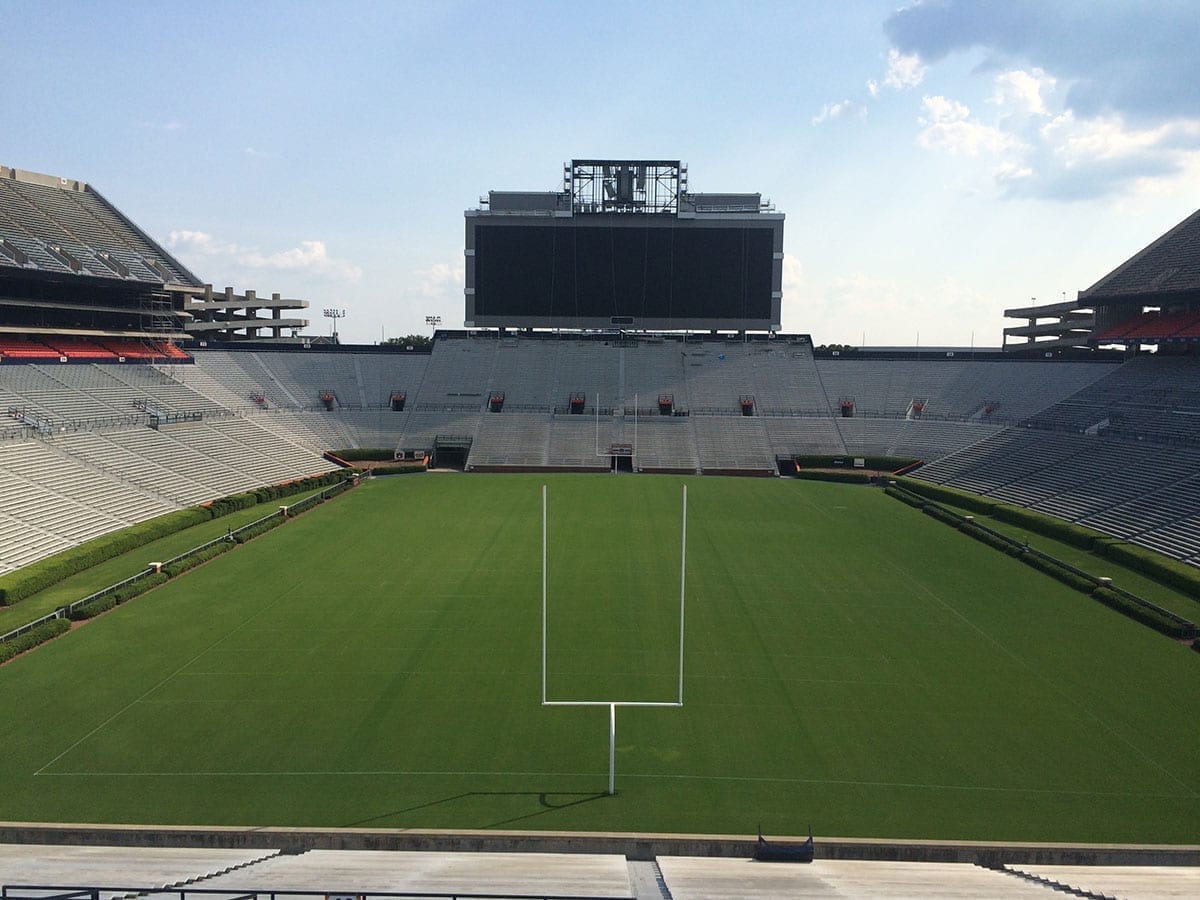 Located on the campus of Auburn University in Alabama—a prominent public research university—Jordan-Hare is the tenth largest on-campus football stadium in the National Collegiate Athletic Association (NCAA). In a recent independent survey of Southeast Conference college fans, Jordan-Hare Stadium was rated the number one game day experience among SEC colleges.

To build on this excitement, Auburn University—which has over 27,000 students—recently made a substantial $14 million investment in its stadium’s infrastructure, including the installation of a giant LED video display that’s perched above the south end of the football field.

Now, when Auburn Tiger fans fill the stadium’s 87,451 seats, they can’t miss the spectacular multi-camera HD video show taking place on the 197 x 57 foot display. But it wasn’t long before the University realized that its stadium also needed live sound big enough to match the impact of the LED display.

Auburn University decided to make another equipment upgrade to boost the live sound quality of its game day experience. The new sound system needed to permeate the stadium and concourse with high-quality audio, and reach the ears of every spectator in the venue.

Daktronics, which had been commissioned by Auburn University to design, build and install the LED display, was brought into the project to tackle the need for exceptional game day sound. Daktronics—whose name is virtually synonymous with big-screen displays—normally distributes most of its display products via its dealer network; however, the company directly handles systems integration of its customers’ largest displays, including sound systems.

According to Sturzenbecher, the new Dante audio network outperforms the stadium’s previous analog distribution configuration in its ability to deliver an exciting and engaging audio-visual experience.

“We use Dante on roughly 60 to 70 percent of our big-screen installations because it’s extremely flexible, scalable, and configurable,” said Sturzenbecher. “And its seamless interoperability between components makes it easy to expand existing installations.”

The Dante audio network, which is centralized in an audio control room in the stadium’s press box, allows a single audio operator to manage a wide array of inputs from CD players, microphones and other devices that are used by the announcers, referees, and musical performers. Dante also routes audio over IP from a Midas mixing console in Auburn University’s video control room, located one half-mile from the stadium.

Working in tandem with Dante-compatible networking components, the CL5 delivers the audio signals to the DSP units around the stadium. One such component is the BSS London-BLU-806 digital signal processor, which converts various analog and digital audio signals to the digital format required for transmission over the Dante network, as well as performing venue routing and equalization.

“The London BLU-806 essentially acts as the brains of the network because it does the majority of the processing. It takes in Dante streams from the mixing console, performs the processing and then routes the audio throughout the various locations, such as the press box, loudspeakers, delay speakers and other network destinations,” said Sturzenbecher.

The Dante network also utilizes six London BLU-326 processors, which accept Dante signals and decodes them to AES-EBU for the public address system, monitors and loudspeakers. From the control computer’s touchscreen, the operator can control the volume and other quality attributes of every audio signal and device on the Dante network.

“One definite advantage to this Dante audio installation is that we didn’t have any signal routing limitations, and we get the same quality audio signal out that we put in, even at the end of 2000 feet of fiber,” said Sturzenbecher.

With the wide range of Dante-compatible components available on the market today, such as the Yamaha CL5 mixer, London BLU-806 and 326 processors,

With the Dante Audio over IP networking solution at Jordan-Hare Stadium, Auburn is enjoying significant cost savings, time-and-labor savings, and operational advantages, including:

Based on its overall positive experience with the big-screen video display and Dante audio network, Auburn University is already planning another upgrade to its stadium’s north end zone stands.