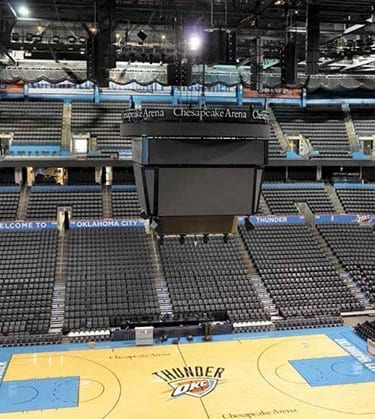 An Eastern Acoustic Works (EAW) Adaptive sound reinforcement system was recently installed at Oklahoma City’s Chesapeake Energy Arena, home of the NBA Thunder basketball team. This is the first Anya system to find a permanent address with an NBA/multipurpose arena.

Not only does the new Anya system provide the sound clarity and coverage that the Chesapeake Energy Arena required, but it also offers great system flexibility via EAW’s Resolution software.

Richardson, TX-based Marsh/PMK International designed the new system while Oklahoma City-based Ford AV provided system integration and installation. After much deliberation—which included demonstrations of several other EAW loudspeakers—Jerrold Stevens, associate principal/director, AV systems at Marsh/PMK, specified the Anya PA. Not only does the new system provide the sound clarity and coverage that the arena required, but it also offers great system flexibility via EAW’s Resolution software.

“The client made the requirements of the new system very clear from the start,” Stevens explained. “In addition to vocal intelligibility, they wanted to create an energetic environment that would rival other NBA arenas in the region. That necessitated a system that could ramp up the crowds with high-quality music. Anya offered everything they were looking for.”

Stevens specified four straight-hanging Anya arrays, which were hung above the scoreboard. The far ends (north and south) of the arena are covered by arrays made up of two columns of six-high Anya modules. A pair of four-high, two-wide column arrays covers the close-in (east and west) sections of the arena, providing 360 degrees of horizontal coverage.

“Anya is far more advanced than a vertically steerable array, creating a single wavefront that matches the area you are trying to cover,” Stevens said. “In this case, we wanted to avoid the sound-reflecting vertical surfaces in a venue created by the horizontal band of suites that separate lower and upper seating areas. Anya creates a custom wavefront to match these requirements in a single beam. The coverage is seamless.”

Such coverage is no easy task in the 581,000-square-foot facility that seats more than 19,000 for concert events and 18,000 for basketball. Stevens added, “The net result is, when you walk from the front row to the top row of the arena, it is very, very even coverage. It sounds like a point-source loudspeaker, rather than a line array. It has incredibly clean impulse response. It shocks me every time I hear these things.”

EAW’s Resolution 2 software lies at the heart of control and system flexibility—another requirement by arena management. Because the arrays are configured digitally via Resolution, the coverage pattern in the multipurpose venue can be changed at the push of a button, adding increased flexibility.

“Suppose the arena has an event where they don’t need the upper seating bowl. They can recall the appropriate preset and the processing will change the output wavefront of the arrays to cover only the lower bowl and the floor,” Stevens said. “This contrasts with a traditional line array system, where you have to bring the arrays down, change the angles between all the boxes and send the arrays back up again.”

“There is no other system on the market that would provide the venue with the ease of use and versatility of Anya,” Stevens added. “A point-source solution would have required extensive re-cabling and rigging, as well as rewiring of DSP and amplifiers. A line array solution would ultimately have been more expensive—between quantity of boxes, amplification, and installation—and would have required physical reconfiguration for different coverage needs. Anya minimized the need for additional fills, as well as the amplification and cabling, plus it was easy to hang and had the shortest installation time. The flexibility the presets provide really sealed the deal. EAW did an exceptional job providing exactly what the arena required.”

Four straight-hanging Anya arrays were hung above the scoreboard. The far ends (north and south) of the arena are covered by arrays made up of two columns of six-high Anya modules. A pair of four-high, two-wide column arrays covers the close-in (east and west) sections of the arena, providing 360 degrees of horizontal coverage.

Adding To The Mix

The new Anya system isn’t the only audio component that contributes to system flexibility. Stevens specified a Yamaha CL3 console in a road case that can be easily placed on the arena floor when an event warrants it. Typically, the console is located in the new mix position located on the upper level in front of the seating area. Dante connectivity, as well as access to the secondary and house network, is available at FOH, on the arena floor, and via additional Ethernet connections located throughout the venue.

A Yamaha Rio 3224-D Dante I/O box aids in transport to and from the new mixing console via Dante. Two additional Yamaha Rio 1608-D boxes in portable road cases provide inputs and outputs at any location with access to the Dante network. The entire system runs on the Dante platform, providing control and signal routing between the new mixing system, existing DSP, and the Anya loudspeaker arrays via standard Ethernet.

Now almost halfway through the basketball season, the Thunder—currently ranked sixth in the Western Conference—are keeping their fans on their feet with the excitement generated by the new Anya sound reinforcement system.

“The Anya system has boosted intelligibility, enriched the quality of music playback, and improved overall coverage,” Stevens said. “It has enhanced the overall fan experience at Chesapeake Energy Arena and made it more competitive with other NBA arenas—mission accomplished.”