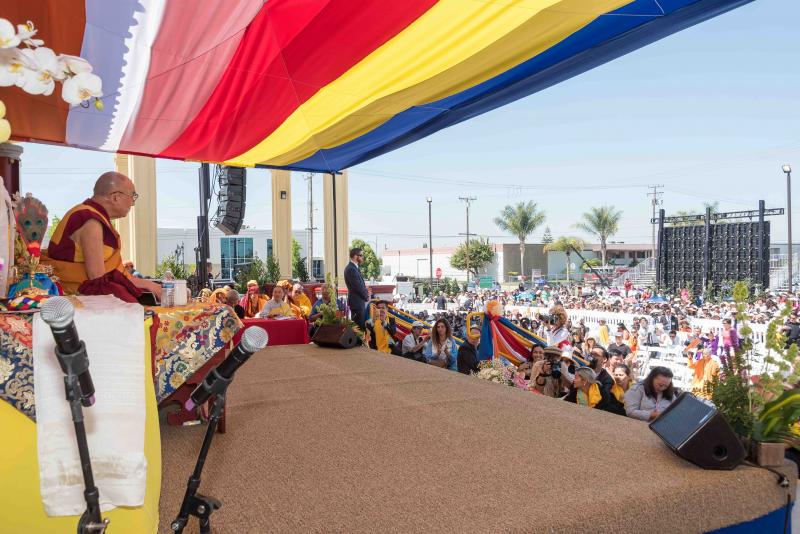 Premiere Production (Garden Grove, California) has been providing full production services for corporate and entertainment venues and events since 2000. On June 18 and 19, they had the privilege of providing audio production at the Dieu Ngu Temple in Westminster (CA) to welcome the 14th Dalai Lama for two days of compassionate teachings with attendance reaching 10,000.

For the special event, Premiere Production brought in a NEXO GEO S12 line array, PS speakers, a Yamaha CL5 Digital Audio Console, and two Rio 3224-D input/output boxes (one used as a stage box, the other for press feeds).

The NEXO system included 24 GEO S12 boxes configured into 4 zones of 6 per zone, PS10R2 speakers for front fills and the Dalai Lama’s monitors, 16 PS15s used as delay speakers and other indoor halls, and 8 NEXO 4x4 NXAmps. “The NEXO GEO S1210/1230 and PS15s work really well together, and the sonic quality is superb, says Pham. The NEXO and Yamaha CL5 system sounded amazing; the console is easy to get around, with Dante networking playing an important role. The PS15/PS15 R2s are our company’s workhorses!  We use them as monitor wedges for bands that demand high SPL on stage, as well as utility speakers for events such as fashion shows and corporate events.”

“It was an honor for us to take part in this special event, adds Pham. The Dalai Lama teaching was such an important event for both attendees and for us.”

NEXO and Yamaha Deliver Clear Sound for the Dalai Lama