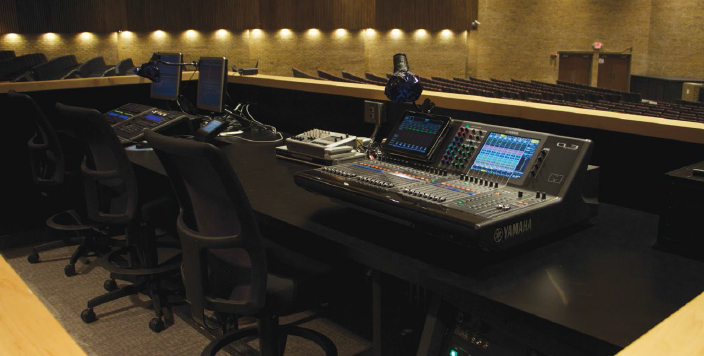 The expansive Richardson Independent School District in the metropolitan Dallas, Texas is comprised of 55 campuses serving more than 38,000 students.  Covering 38.5 square miles and portions of three cities (including Dallas), the district claims a long-standing reputation for educational excellence that is continually recognized at state and national levels.

Quality Sound and Communications, a leading AV design-build contracting firm specializing in education systems, secured the contract for the upgrade project. Quality Sound partnered with ESP of Texas to support the systems integration and programing of the audio networking deployment.

Mike Utzman, owner and president of ESP of Texas, notes latency as the main challenge he historically experienced with past audio networking technologies.  However, these challenges were put to rest with Dante. Utzman is convinced that Dante™ is a better performing networking choice to minimize latency while also providing great-sounding audio.

“Latency has been a negative issue with Cobranet in the past, and Ethersound was not well suited for mixed network scalability. Dante eliminates these problems due to its ultra low latency and its ability to use a standard IT networks,” said Utzman.  “Legacy network protocols were fine in their day and if not for them we probably don’t have other options. Dante is a far more advanced solution than any of the other protocols. Dante offers peace of mind in knowing we have a very solid and reliable networking solution while providing clean and concise audio.
Dante has advanced networking capabilities and more importantly, does what it is supposed to do.” 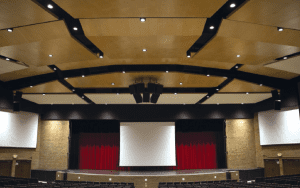 Since Dante may be integrated in so many AV manufacturers’ gear,  WJHW, the project consultant ,was able to design in multiple manufacturers’ products to deliver a high performing, cost-effective solution to meet the school’s budget. The complete Dante-enabled system installed in each high school includes a Shure SCM-820 auto-mixer, six (6) Shure ULXD4Q wireless microphone receivers, a BSS Soundweb London Blu-806 signal processor coupled with a Blu-120 I/O expander unit for 28 channels of hard wired inputs, and Blu-160 digital signal processors coupled with a Blu-120 unit to handle signal distribution to the existing amplifiers along with a Yamaha CL-3 console.  Using a standard IT network environment, setting up the network to distribute audio channels was uncomplicated with Dante.

“I have done some smaller, stage box-to-console Dante projects, but this was the first one where we were intermixing so many different manufacturers,” said Utzman.  “We put everything together offsite, and once onsite we just had to verify inputs and outputs and start tuning the system. The ability to move these signals around in a multicast situation simplifies everything.”

The Shure ULXD4Q wireless microphone units interface with the Yamaha console.  This provides local head amp control for the 24 channels of wireless microphones from the desktop that Utzman says “acts just like an analog rig, but with far less cabling.”  (The entire audio path for this system is networked over a dual Cat5e wire with a redundant system setting; and married with two HP switches, primary and secondary.)

Utzman has installed several Harman BSS systems in the past, but with the BSS’s new Blu 806 with Dante, this immediately paid dividends in saving costs for Richardson ISD.

“The original specifications called for four (4) BSS Blu-806 units, loaded with eight (8) Blu-In cards( for the hare wired inputs) and eight (8) Blu-Out cards (for signal distribution),” said Utzman, “but because of Dante’s high-channel capacity we only needed one Dante card to move the audio in and out.  Dante helped us reduce a lot of the related costs because we could move all that audio through a single BSS Blu-806.”

The final Dante system was 56 in by 18 out.  Utzman swapped some components so that all of the inputs came in via a single Blu-806 coupled with a Blu-120 unit loaded with four (4) BLU-IN cards each.  The signals are sent out via a Blu-160 unit, and coupled with a Blu-120 unit with four (4) BLU-OUT cards - each using Blu-Link to interface between the various BSS units.

Not only did the school district benefit from cost reductions, Utzman stresses that the Dante networking solution sets up each high school for simple, sensible audio system flexible growth as warranted.

“We have some extra inputs and outputs on the BSS units for expansion at some point,” he said.  “I just have to assign them into the Dante controller and call it a day.  The only limiting factor for expansion is console capacity, which in this case should not be an issue.”