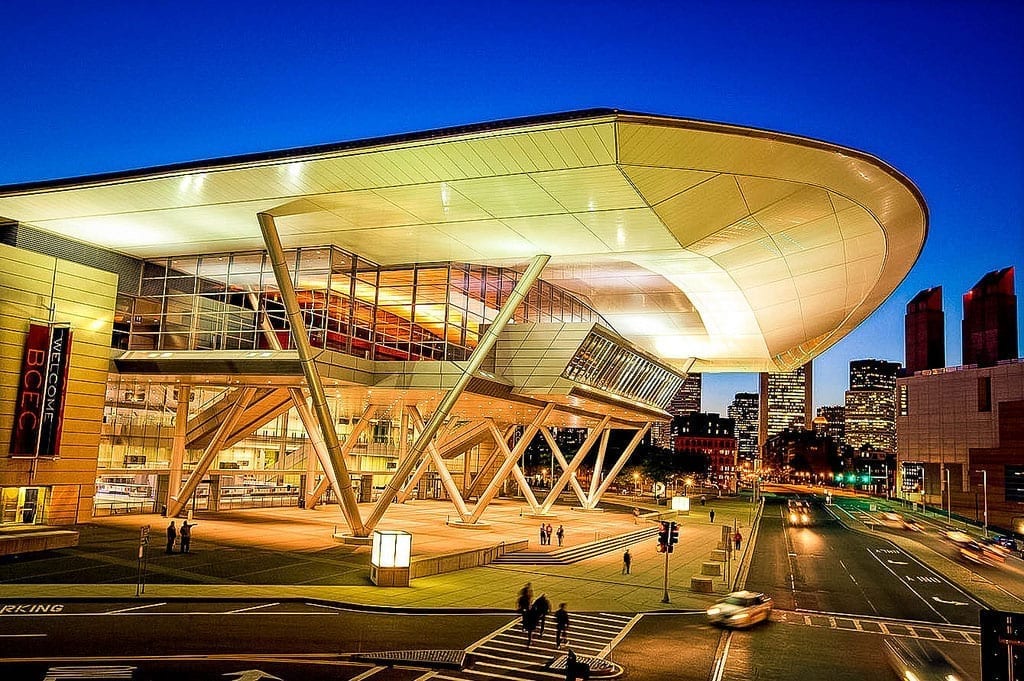 As one of the largest exhibition centers in the Northeastern United States, the Boston Convention & Exhibition Center (BCEC) boasts over a half million square feet of exhibit space utilizing a wide range of best-in-class technologies. BCEC exhibitors enjoy access to BCEC’s many technological amenities, including fast Internet speeds, Wi-Fi, scalable telephony, and digital signage and displays.

Recently, with the help of Communications Design Associates (CDA), a Canton, Massachusetts-based consulting, design and integration firm, the BCEC embarked on a new project to install Dante digital audio networking by Audinate throughout its key exhibit spaces and adjacent meeting rooms.

This upgrade to a 6,144-channel Dante network has resulted in improved routing of voice, background music, emergency announcements, data and more, for the benefit of BCEC exhibitors, their staff and guests across 45 locations within the BCEC. And the investment has already yielded significant savings in cable, equipment and labor costs during installation. It also resulted in a highly versatile, convenient digital audio network capable of supporting the unique digital audio routing needs of conventions large and small.

Prior to choosing the Dante digital audio networking solution, the BCEC had reached a point where its existing audio system, installed in 2001, had reached its end of life.

With roughly 17 bundles, each of which housed eight separate cables, routing audio had become a nightmare.  The system was cumbersome and costly to install, bogged down with latency, and difficult to operate and scale to meet changing needs.

That’s when BCEC executives approached CDA for ideas on a better, faster, easier and more efficient solution. When the project launched 2.5 years ago, CDA immediately got to work developing plans for a digital audio network with a backbone capable of supporting 45 nodes (serving 90+ rooms or areas) within this enterprise-wide ring. This network ring would need to have:

It also had to allow the BCEC to easily expand this infrastructure to meet its future digital audio networking needs.

For CDA, all signs pointed to Audinate’s Dante digital audio networking solution, which leverages a standard IT LAN. The company recommended Dante for the BCEC, citing its tremendous scalability and low cost of ownership over analog and early-generation networking systems.

“At the core of this network is Dante’s ability to route audio from anywhere to anywhere without re-engineering the network because of its inherent flexibility,” said Joe Patten, Project Design Manager for Communications Design Associates.

“Every project I manage today is Dante,” Patten added. “The benefits over other networking technologies are clear, starting with manufacturer adoption. There are more vendors and products that support Dante today than any other system. The beauty of Dante is that I don’t need to use a special switch—any off-the-shelf Gigabit Ethernet switch works.”

The 17 bundles, plagued by split-distance limitations, were replaced with a single Cat6A cable that could support 128 channels with the bandwidth efficiency that was required.

“When you look at the total cost of installing an audio system, the cost savings with Dante was obvious. Take the cost of a Cat6A cable to run 128 channels of audio, versus twisted pair with a shield cable times 128 for 6000 end points,” said Patten.

The Dante Brooklyn II chip enables 128 channels to pass over a single Cat6A cable rather than needing to bundle one copper cable for each of the 128 paths. “Because of this, we also reduced the size of our conduit by more than 75 percent and—with only one link versus 128—we also slashed the time needed to pull cables and the amount of space the cabling required.”

The design strategy brought together 47 Dante-enabled Harman BSS Blu 806 digital signal processors, each of which acts as a routing hub. The 806 units are programmed with BSS BLU link software to communicate across each Blu 806 and Crown amplifiers distributed throughout the facility. Each Blu 806 hub includes a minimum of 10 busses to bring in background music, zoned or all-call paging and voice evacuation information.

The network also offers inherent redundancy, and is strategically partitioned to allow the convention center to light up only those zones that are needed, depending on the size of the event.

Since the initial installation, BCEC’s Dante network has already been increased and now has the ability to hit 97 distinct spaces across the convention center. And its ability to easily route high quality audio anywhere it needs to go is now virtually limitless.

“We’ve seen a very significant savings from start to finish on the integration side,” Patten added. “And our long-term costs will be minimized when we inevitably expand the network—per the BCEC’s future plans—to extend its reach to other areas within the building as well as nearby hotels and other venues. The possibilities are endless now that BCEC has Dante as its foundation.”