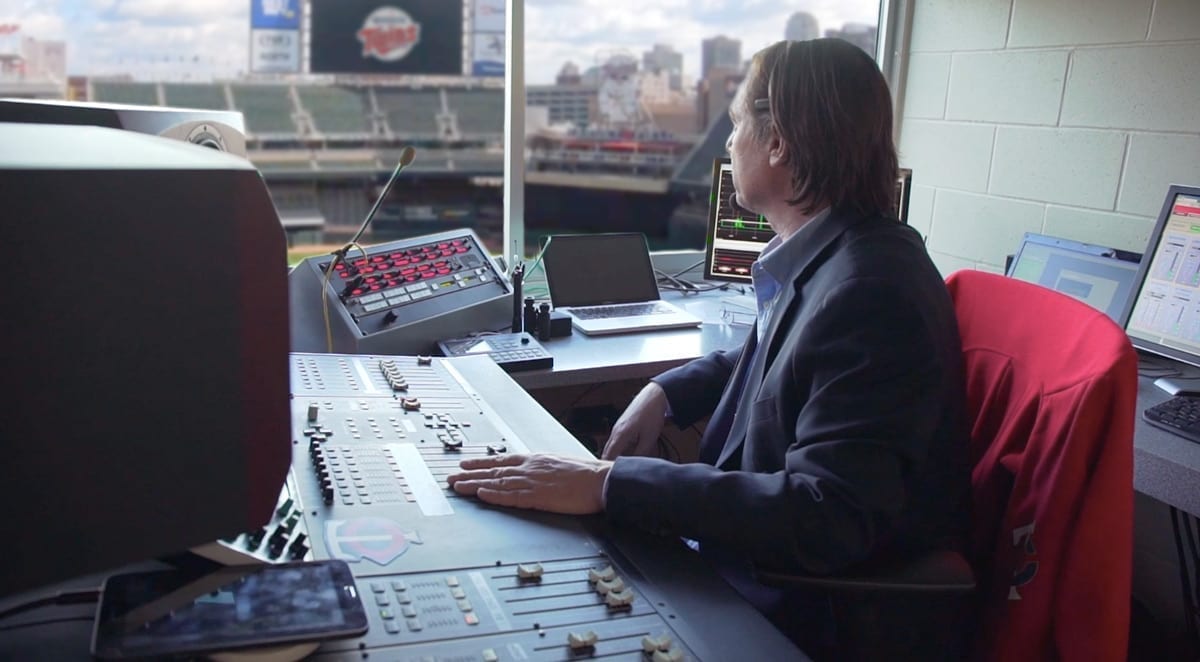 Sitting in the heart of downtown Minneapolis, Target Field represents Minnesota’s dynamic blend of urban sophistication and outdoor vitality. This Major League Baseball stadium is home to the Minnesota Twins and accommodates more than 39,000 eager spectators ready to cheer on their team. Though designed as a baseball venue, it also hosts football, soccer, and a wide range of outdoor concerts and various non-sports-based corporate events.

The stadium’s premiere offerings extend beyond the seats as well. To give those in attendance a truly incredible experience, the facility’s business operations looked for ways it could deliver excellence across all ballpark offerings. One area where this was critical was the ballpark sound, which means high-quality audio is a major part of the fan experience at Target Field.

Target Field is a large venue and multiple areas around the facility require Pedersen’s audio support. This can include distributing audio out to various areas or pulling signals back to the control room for mixing and processing. For example, live bands perform before ball games and during breaks. Pedersen must be sure this audio is heard throughout the stadium.

There are many different subnets in the facility and all audio transport was previously occurring over the network using CobraNet. While the CobraNet system is still in place to transport DSP audio data over fiber to and from fixed locations, such as amp rooms, clubs and press areas, the system reached its maximum capability and a new solution was needed. Additionally, demand for a better fan experience required adding audio in areas that were not originally planned for audio support. To add audio to these sections, the stadium expanded with Dante and Dante Domain Manager.

Pedersen needed a way to easily and inexpensively expand the number of inputs and outputs to his main console to provide a better fan experience, a better mix, and manage and control the total system. His search led him to Dante. The natural next step was to install Dante-enabled equipment, immediately upgrading the system by expanding channel counts, expanding audio infrastructure and reducing latency.

Dante is a digital media networking technology allowing users send uncompressed, multi-channel audio over a single Ethernet cable. It is the de facto standard audio networking solution, and has been adopted by more pro-audio AV manufacturers than any other networking technology, making interoperability easy, reliable and a true reality. With Dante as the networking solution, the team at Target Field can integrate audio from a wide range of audio devices from multi-vendor manufacturers.

Dante also allows Target Field to tap into the existing networking structure of the field, without having to install extra infrastructure to get audio where it needs to go. Pedersen added wireless microphone receivers, mixers and input/output racks as a base for his Dante system. Prior to Dante, Pedersen was limited by its CobraNet system – it was simply maxed out. With a Dante system in place, Target Field now has more than enough audio channels available.

"We would have a band performing on the other side of the stadium, and there was very limited connectivity, so I could only get two audio lines to use: one for an intercom connection so we could communicate with our technician located with the band, who would then send me a sub-mixed signal back on the other audio line," said Pedersen. "We were able to get the job done, but it was a difficult process to say the least. My dream was to have control of all of this in front of me on my console, with separate channels for mixing. I finally got to do this by adding Dante connectivity into the system."

The stadium's audio system consists of a control room tied to multiple locations. There are three amplifier rooms supporting the stadium speaker system, as well as 18 other locations that receive audio feeds from the control room.

"We started by using Dante to connect the control room to the band stage, and this step alone brought 16 channels from the band to my main console – a huge improvement for us," said Pedersen. "Our plan now is to get Dante into all of our remote locations and bring all the control and mixing to our main control room."

"If we need more remote support, I can easily plug in a network cable and jump on the Dante network to my console," said Pedersen. “There's a lot of flexibility now in being able to share inputs and outputs with different mixers in different areas."

A Dante system allows endless audio possibilities for the stadium, as hundreds of Dante-enabled products are available and interoperable. Pedersen can now mix any Dante-enabled speaker, amplifier, microphone, mixer, receiver, converter and more. And, with the addition of Dante AVIO Adapters, the stadium can integrate older, legacy gear into Dante systems, adding to Dante’s interoperability and flexibility.

For game producers to add to the fans’ game experience, Pedersen and Habedank needed to integrate audio into areas of the stadium that were not originally designed for audio, such as where the live band plays. Instead of adding an audio pathway and thousands of dollars of cabling, they used an existing data drop at these new locations, adding a Dante input/output box and plugging it into the network. However, these new locations were not on the same subnet as Pedersen’s control room. With some configuration and help from the stadium’s experienced IT department, Dante Domain Manager stepped in to bridge the various subnets, easily passing Dante audio from the new locations back to the control room.

"At Target Field, they have a Layer 3 network at the closet, so that means every closet has its own subnet. The control room on the opposite side of the stadium was in a different subnet than the live band location," said Habedank. "Dante Domain Manager allows us to bridge these subnets and pass Dante from one corner of the stadium all the way back to the control room and really save the day without all of that cost of cabling."

On the network level, Dante Domain Manager provides the ability to scale and segment audio networks, regardless of the physical constraints of the network. Administrators can define specific AV device groupings, by room, building and site, ensuring the stadium’s audio is playing in the correct location.

Target Field works with network television broadcast trucks during games. More and more, these production companies bring their own Dante systems to connect into the stadium’s Dante system. Dante Domain Manager ensures both the visiting and stadium’s audio channels are secure, crisp and clear.

“We want to protect the house Dante network to make sure that no one inadvertently makes changes,” said Habedank. “Without Dante Domain Manager, that protection is not possible – we essentially open up our whole Dante network to outside companies. But, with Dante Domain Manager, we’re able to create those domains. Outside companies stay in their domain, the house network stays in its domain, and we can bridge the audio between those two as needed. That way we can still have a lot of functionality and can pass as many audio channels back and forth as we want, but we also maintain that protection of the house Dante network.”

“Before Dante Domain Manager, what I wanted to do was not really possible: the cost would have been prohibitive and the time spent patching and running cables wasn’t feasible,” said Pedersen. “One of the things I can do now is send 16 channels of audio to almost any place in the stadium up to the control room. It is very liberating.”

As the system becomes larger and more complex, the Dante Domain Manger dashboard helps engineers keep tabs on devices and user-made changes. The dashboard provides the critical information with at-a-glance reports, audit trails and SNMP-driven alerts. Additionally, Dante Domain Manager steps in to fix problems with its error logging feature that shows an issue and offers suggestions on how to fix it. Or, Dante Domain Manager provides a suite of auto-configuration tools to fix network issues automatically.

Pedersen explained that while he is currently limited to a 16x16 Dante-enabled console, a new console is in the upgrade plan and he looks forward to expanded channel possibilities.  He also wants to extend the Dante network to the broadcast trucks.

"After our facility audio is completely networked, I want to move toward Dante and Dante Domain Manager-managed audio with our broadcast. Right now, we send the trucks a full audio program, and they return a full program. We need to get to where we can send just selected channels or sub mixes," said Pedersen. "We've always had difficulty transferring things back and forth from the trucks to our control room, and it almost takes six people to do it. This whole process will be much easier when the trucks can simply pull either the live or recorded audio of what they need from our Dante audio network."

Whether it is a concert, football game, soccer game or Major League Baseball showdown, Dante and Dante Domain Manager deliver near-perfect, near-zero latency audio to the more than 39,000 spectators. Target Field administrators can rest easy knowing its network is secure and efficient while delivering the live sound, recorded and broadcast audio performances required to take fans out to the ballgame.