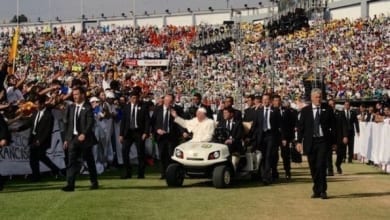 3G Productions of Las Vegas and Los Angeles was contracted to supply high quality audio for the last appearances by Pope Francis in the remote outposts of Morelia and Juarez, Mexico with limited time to set up a vast fiber network to carry signals covering several zones from the console to the amplifiers over exceptionally long distances.

The actual venues for the Pope’s final Mexican appearances included the Jose Morelos Pavon Stadium and the Estadio Venustiano Carranza, a soccer stadium, in Morelia along with a park, Parque Publico Federal El Chamizal, and a small adjoining soccer park in Juarez just north of the U.S. border.

The basic fiber network approach used by 3G at all of the Pope’s events consisted of running the AES signals for the PA, subs, delay towers, stadium, stage left and right and press areas from the FOH SSL L500 Plus console to a Lab Gruppen LM44 Lake processor, then all of the signals to a Dante audio over IP fiber network, to a Focusrite RedNet D16 to convert the signals back to AES for transmission to the d&b D80 amps used in all of the setups.

According to Jon, the results were successful enough to elicit positive from Pope Francis himself: “His secret service detail came to FOH, thanked us and said the Pope felt it was incredible sounding. He had been concerned about how it would sound in Juarez and Morelia because those were later dates and kept getting pushed back because of the scheduling. According to his staff, the Pope was expecting it to sound inferior to the other sites like Mexico City, but he was really impressed!”