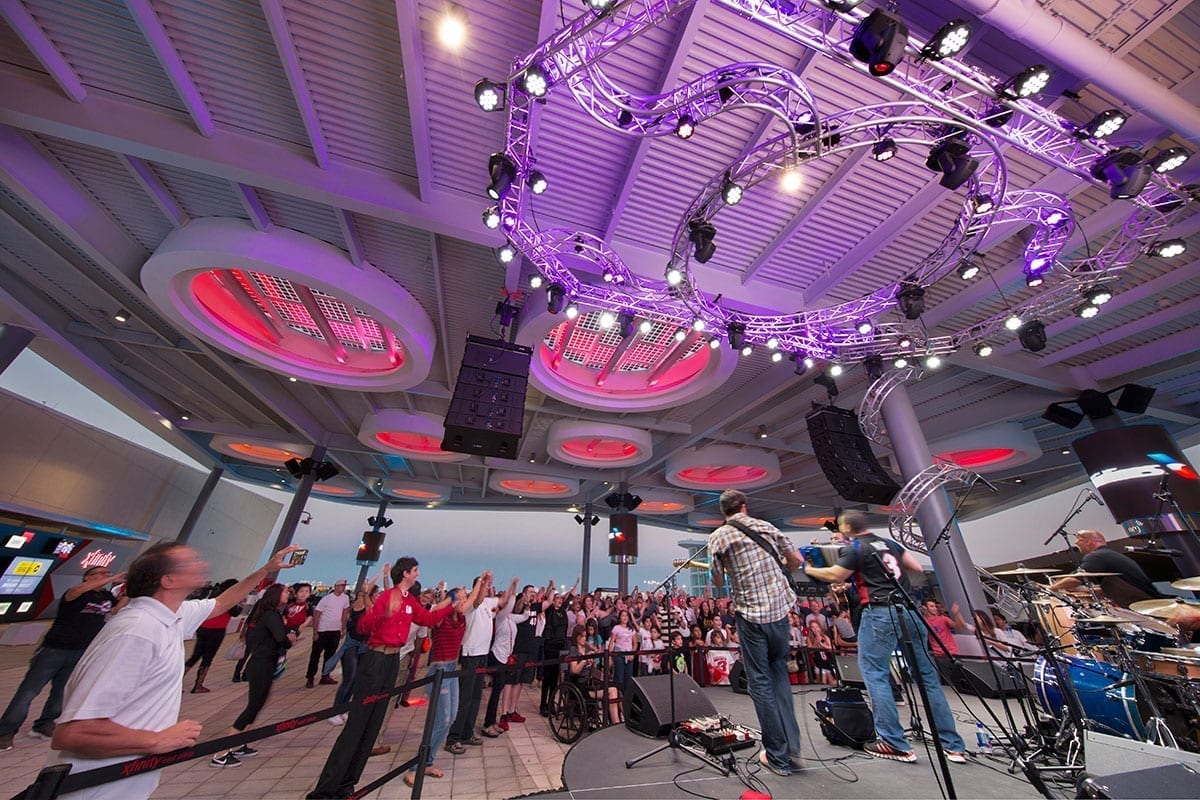 Home to NBA's Miami Heat and more than 80 various live events annually, the versatile AmericanAirlines Arena in Miami, Florida has been at the forefront of state-of-the-art audio-visual technology for over 15 years. With the completion of the brand new Xfinity Plaza, a 23,000 square foot, outdoor entertainment venue on the east side of the AmericanAirlines Arena, the challenge of installing an AV system that provided the best possible directional sound coverage and quality under a very tight deadline was answered with Dante audio networking.

The HEAT Group, which comprises the marketing and booking arm of AmericanAirlines Arena, has aggressively invested in state-of-the-art technology, renovations and expansions over the past 15 years. Most recently, this included a complete audio-visual upgrade inside the arena bowl; and a built-from-scratch exterior performance area.  As of February 2016, both areas utilize Audinate’s Dante Audio over IP networking solution for low-latency, multichannel audio routing and distribution.

The outdoor entertainment venue, Xfinity East Plaza (XEP) is a new 23,000 square foot covered space located on the east side of the Arena. The initial XEP system planning focused on the careful placement of the DAS Audio loudspeaker columns providing the best possible directional sound coverage and quality. Optimizing the system achieved the goals of perfection, but it left much less time to complete the remaining integration projects on the drawing board.

Thankfully, Jorge Arronte, manager of arena sound and matrix for The HEAT Group, was already well-versed in the ease and speed of installing a Dante digital audio network.

“With an analog distribution system, the copper connections put limits on how quickly you can set up an audio system in a place not in the original design,” said Arronte. “We had some networking through EtherSound systems, but were constantly rebooting what was basically a single connection between a console and a remote rack. This is something you don’t want happening during an NBA game or a concert, as you’re essentially on pins and needles for the rest of the event.”

With the indoor Dante system working flawlessly for well over one year since installation, the next step was to replicate that success for the XEP project – and do so under a very tight timeline.

The freedom that Arronte found in transitioning to Dante inside the arena was a game-changer that would influence the XEP systems design. The initial arena network included 24 Dante-enabled devices, including an AEQ NETBOX 32 AD breakout box feeding Lab.gruppen Lake LM26 speaker management processors and PLM1000Q amplifiers. The entire network was deployed using Juniper switches – rarely deployed in AV systems, but representative of Dante’s flexibility with nearly any switch on the market.

“Dante opened up a lot of doors for us inside AmericanAirlines Arena,” said Arronte. “We transitioned the Juniper switches from service mode to enterprise mode to align more cleanly with the Dante network, and very quickly we were moving multicast signals to our Lab.gruppen Lake amplifier cubes inside the bowl, as well as in restrooms and smoking balconies, among other locations.”

This was an immediate benefit, as achieving the sound quality desired by both the NBA and other discerning audience members was a significant challenge with the old system.

“The sound was instantly 100 times better using the Dante network, audibly being much tighter, whereas before I did a lot of creative manipulation of highs, mids and lows using a dedicated EQ station,” noted Arronte. “By the second game, I reduced the latency from five milliseconds to one. I constantly checked Dante Controller for errors to be safe, and there were none. Dante was clearly stable from the start, and handled everything perfectly.”

Dante’s total cost of ownership has also provided value every step of the way, with connections taking “hours versus weeks” simply through the transition to network cabling over copper. Reconfiguring the system for different events is also simplified.

“I can run any signal to anywhere in the building I want now, and I’ve even eliminated eight patchbays that were in the original design,” said Arronte. “If someone requests an audio signal, all I need is a port to set it up. And since Dante made life much easier inside the arena, there really was no question that we would use it again for the XEP project. The savings by continuing to use Dante were significant. Since network cabling was now abundant all around the arena, there is no question it minimized the time we needed to open XEP to the public.”

The core of the Dante network for XEP was centralized to a telecom room adjacent to existing IT racks, which minimized cable runs to the Lab.gruppen Lake processing and amplification systems that power various loudspeakers and stage monitors. As with inside, the sound quality and latency at XEP have been widely praised, and has been used for live pre- and post-game performances from Flo Rida, DJ Natty Rico, DJ Irie and many local bands.

Arronte notes that with Dante already functioning throughout the rest of the building, the process of configuring, sending and receiving signals needed at XEP or in the main control room is a matter of seconds versus hours.

“That expediency is crucial on game nights, when things run especially fast,” said Arronte. “We recently had a request to add some music-activated visualization to an LED screen behind a DJ on stage at XEP. I added a dual-channel receive unit, added another Dante port to the switch, and it was up and running in less than a day – much to the surprise of the executive who suggested the idea. These are the reasons I am happily married to the Dante system.