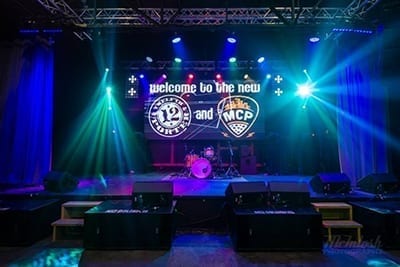 The world famous 12th and Porter music club located in Nashville, TN has a long-standing reputation as one of the America’s legendary venue for live music.  Thousands of musicians and bands have played the venue, which was recently voted by Nashville Scene readers as second only to the historic Ryman Auditorium for live music.

However, the club that once hosted an unannounced 45-minute solo Neil Young performance, among other rare superstar club shows, had increasingly lost live shows to competing venues with recent sound system upgrades.  A change in ownership ushered in quick action to ensure that the club’s reputation as a premiere live music venue would not be left behind.

The new owner retained the professional sound services of Nashville-based Morris Light & Sound, which for 25 years has provided audio, and lighting services for live events, tours and fixed installations throughout North America.

John Mills, vice president of Morris Light & Sound was taken aback when he surveyed the existing landscape at 12th and Porter.

“There was a temporary, rented system on site, but essentially I came into an empty room and asked the owner what he wanted for a sound system,” said Mills.  “He said, ‘I want to be the club that musicians tell their peers about after they perform,” which gave me the freedom to specify a killer system.”

Mills knew immediately that the club needed a far more powerful audio presence, bringing in a Nexo PA and amplification rig to fill the club with pristine, full-range sound.  Furthermore, he wanted a clean and modular networked solution to route multi-channel audio between the front of house console and the stage, while offering plenty of on-site flexibility for performers as well as room for growth.

He quickly turned to Audinate’s Dante digital audio networking to achieve his goals.  One particular challenge was to ensure that bands bringing their own consoles could plug into the network without complication.

“We setup two isolated Dante networks.  One communicated between the Yamaha CL3 and the RIO stage box. The second was from the DSP to the NEXO amplifiers.   This way a visiting engineer wishing to use the touring audio console could go straight into the System DSP and not have to route through the house console.”

Even with two paths, Mills estimates that the ease of use in laying the Dante network saved well over $1000 in labor.

“In the process we eliminated the need to terminate every last connection in the DSP racks and a front of house snake,” said Mills.  “That saved us a lot of time.  Using Dante, I am saving money at the end of the day because I can get the job done much quicker.”

The heart of the network features a Dante-enabled Yamaha CL3 console, while a Yamaha Rio stagebox is utilized for high-capacity audio I/O and routing.  Mills notes that the system is very modular, giving club owners plenty of room for expansion. 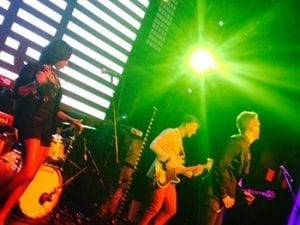 “Modularity is a huge benefit of using a Dante system with a CL3,” said Mills.  “The CL3 supports 72 channels, but I only sold the club 32 channels that they use on a regular basis.  They can rent more channels for a few extra bucks on the rare occasions they need more, instead of spending $10,000 upfront to have inputs 33-64 hardly ever used.  It’s a better ROI for them, and the high-capacity of the Dante network can handle those extra inputs when needed.”

The Rio I/O stagebox is housed with all the critical processing and amplification gear for the sound system, including two Yamaha PCM9501 units that run delay to the loudspeakers.  He notes that the Dante connection to and from the stagebox plays an important role in the sound quality.

“The quality of the gear we put in this club, which may seat 200, is amazing, and Dante is an important reason why everything sounds great,” said Mills.  “The CL3 console with the Dante drive is a very clean way of moving audio.”

To drive that point home, Mills recalls a musician response following the first performance on the system.

“It was a perfect moment,” he said.  “I’m standing at the front of house with the sound engineer and the owner, which is where the bands pass through as they exit the stage.  The guitar player, whom I met at soundcheck, leaves the stage and in a very animated way shares that he has played every club in town, and the new sound system destroys them all.

“The new owner of the club looked at me and asked, ‘How much did that comment cost you?’  It was a proud moment to realize we were responsible for the best live sound in town.”