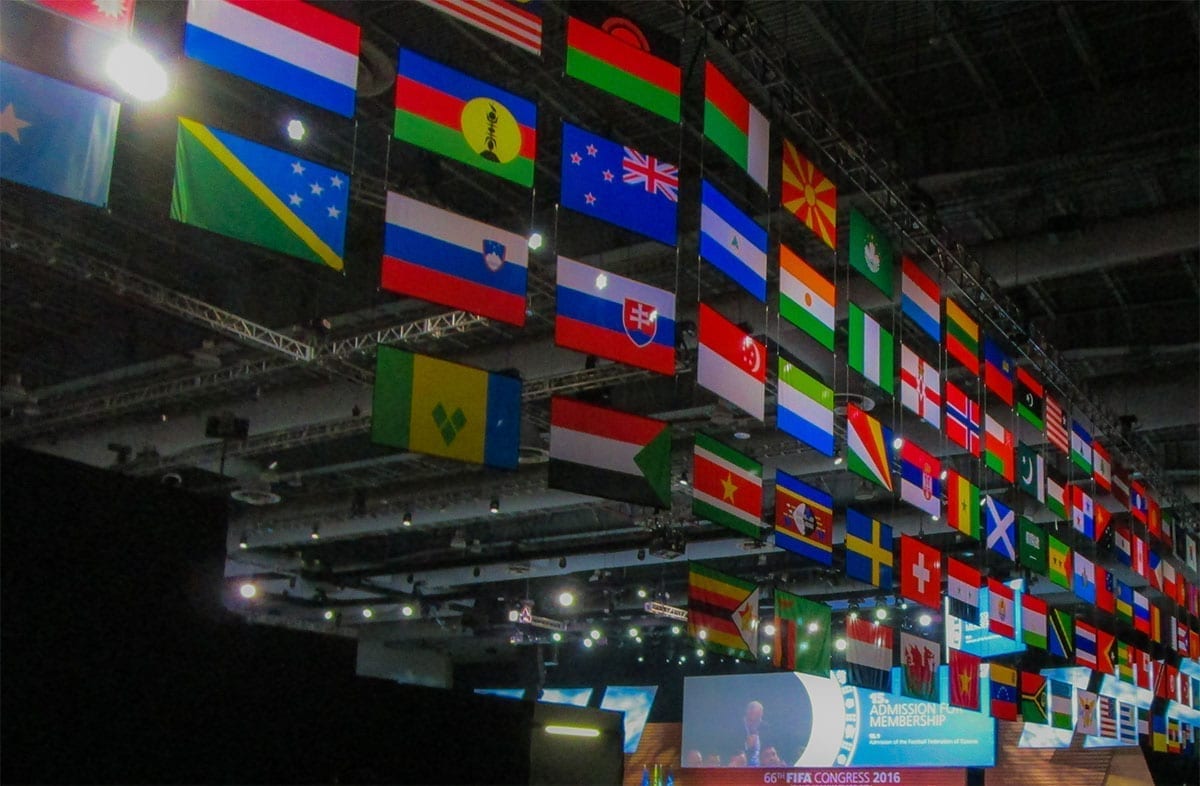 The flexible SSL Network I/O: SDI was recently selected as the core component for broadcasting the 66th FIFA World Congress in Mexico City. Consulting company Evident Productions chose the SSL Network I/O: SDI for its versatility in embedding, de-embedding, and distribution--and it utilizes a Dante Audio-Over-IP network as the source. The project required significant system improvements for the FIFA Congress itself, and involved the challenge of providing the feeds to over 20 international broadcast networks covering the event.

Evident Productions recently provided consulting and infrastructure design for the 66th FIFA World Congress in Mexico City, specifying the flexible SSL Network I/O: SDI as the core component in the crucial broadcast infrastructure for embedding, de-embedding, and distribution, using a Dante Audio-Over-IP network as the source.

Evident Productions founder Peter Blue was involved in significant system improvements for the FIFA Congress itself, as well providing the feeds to over 20 international broadcast networks covering the event. The audio source was taken from the Dante Break Out connections on the Lake LM26 processors (connected to Front of House), and contained six different translations plus the main left and right house channels. For Blue, specifying the Network I/O for this crucial role turned out to be more straight-forward than he had expected: "I needed to send to all those satellite feeds, and the in-house infrastructure needed audio from the conference itself. I also needed to be able to take in from any truck anything that needed to be plugged in quickly, and de-embed the audio in order to send it on...

"When I saw the SSL box I thought 'wait a minute, this fits the bill for everything'. It does both the embedding and the de-embedding for different protocols simultaneously, and it's taking care of the bridging from the audio side of things.

“The real game changer for us though was working with multiple video formats simultaneously. All other embedders and de-embedders that we found that are currently on the market require you to choose one of only two or three ‘select’ resolutions and formats, regardless of what is being processed in or out of other manufacturers’ equipment. When we found out that we could embed audio in 1080i, 720p, and 480i, plus de-embed audio coming into us on any format on the HDSDI stream, all at the same time, in the same device, that was the key point in our decision to specify the Network I/O SDI for this event, and to also make the investment in our inventory."

The Network I/O: SDI was connected to the redundant Dante network and that audio was embedded into several video formats and passed onto the broadcasters. "Inside the Network I/O we were creating four different basic feeds," says Blue, "...The house monitor and a broadcaster world view in three different flavours - 1080i, 720p, and 480i - just so that the trucks and uplinks could easily convert specifically for their own needs.

"The reason we did that on our side rather than just leaving it to the broadcast trucks was because audio delay can be much more easily resolved if you deal with it in the head part of the system, especially with a lot of spoken word and house feeds to deal with. As a result we had no delay problems whatsoever. The Broadcaster didn’t have to worry about timing issues at the truck."

Blue notes that as well as the extensive local redundancy measures in the Network I/O: SDI, the multi-format (MADI fibre and Dante) I/O options on the box can help provide another level of whole-system redundancy simply by connecting both to the source "This box can speak different languages as well as providing not just its own redundancy features, but robust back-up alternatives that can be important if you get a system wide failure on one format for some reason. It doesn't leave your system dead because of something that may be out of your control."

Overall, Blue was overjoyed with the Network I/O's performance on its first outing with Evident Productions. "It's a device that is much more capable than I think most people realise. Once you understand that this thing can simultaneously embed and de-embed, as well as simultaneously talking several different formats... Its versatility is what puts it up there, and the reason why we've invested in one. It's beyond any other individual product out there at the moment.