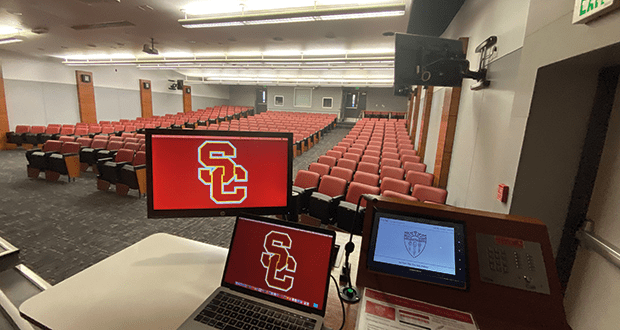 The University of Southern California (USC) is one of California’s most prestigious institutions and one of the world’s top private research universities. Located in Los Angeles, it would be hard to identify just a few areas where the university excels without leaving out a critical program. That said, from its legendary cinematic arts school to its cutting-edge school of medicine, the common thread that runs through the entire campus is a commitment to offering students the very best education and resources possible.

To reinforce that mission, the university hired Joe Way in 2019 as its Director of Learning Environments. The unique title looks beyond just a single component of a classroom or workspace – instead seeking a way to enhance design and technology together. Way has spent his career focusing on the technologies that improve pedagogical methods and learning outcomes. And in one of his first major projects at USC, Way is working to redesign 248 learning spaces in his own vision.

At the core of the installation is Audinate’s Dante – a network protocol that allows for digital media networking, and which Way has long been a fan of. When he first began to design the workflows for the learning spaces, he knew Dante infrastructure would run throughout the campus.

Then, as construction commenced, the COVID-19 pandemic hit. Classes were shuttered, integration was placed temporarily on pause, and Way was asked to reconsider the build out. USC was no longer looking just at providing the most robust AV solutions for on-site coursework, labs and lectures, but needed to also be prepared for the likelihood of at least some blend of distance learning moving forward.

“It was no surprise to me that we didn’t have to change the integration at all,” Way said. “I’m very well versed in Dante, so I knew from the start we would have a flexible system for on-site and distance learning, no matter what changes might be made in the years to come. Because of that, we were ready when we looked at shifting to distance learning.”

Meeting use cases with a flexible, hybrid solution

Way explained that the main challenge they are working to solve is to deploy hybrid solutions where a lecturer is physically in a room, and then captures the lecture audio/video in real time and transmits it out live to the web, while also recording and archiving the content for future use. With these goals in mind, the team has focused on three primary use cases:

First, the university needs a campus-wide system where presenters are in classrooms with a small group of students, all observing social distancing best practices. With room occupancy dropped to about 30%, only a fraction of the student body will be on campus at one time, so day by day, hour by hour, each classroom system needs to capture, transmit and record content, and then reset for the next class, with all the audio and video content flowing where it is needed, as efficiently and reliably as possible, and of good quality.

The second use case is in dealing with classroom overflow. Most classrooms were built for an occupancy of about 30 students seated tightly together, but with social distancing, that number can drop to as low as just 8 to 10 students and a faculty member, depending on the actual size of the room. The AV team needs to have a presenter in a room with a small group of students, and then have adjacent rooms with additional small groups all listening to and participating in the same lecture. The overflow rooms are equipped with cameras, microphones, displays/projectors, and sound systems as well to facilitate interaction.

The third use case involves faculty members who don't wish to return to campus. Way explained that as of now, the university is not requiring anyone to return to campus if they are not comfortable doing so. Therefore, a faculty member might be at home giving a presentation, with her students in a room (or rooms) on campus. An assistant would be in the main room to start the session and assure there are no issues. The presenter’s video and audio would be in on-screen, and physical locations really won’t matter.

“What we’re finding and moving toward is offering a program where we have as many freshman classes in person as possible, and then the upper-division students on line,” said Way. “So, with that strategy, we'll have about 20% actual in-person occupancy, with a hybrid solution covering remote attendees. We’re still working through those details, and the situation seems to change, but that’s our approach right now, but again, the system needs to be flexible to change at any time.”

“I was challenged by the CIO to totally rethink everything here, so I did,” Way explained. “We are moving to all-network-based AV. It will allow us to transmit any signal to any other location. That’s huge for audio now, because Dante was going to be critical in our ability to lecture capture and microphone share. Those quickly went from being ‘nice to have’ to critical. They will very likely be the basis for how we operate our Fall term of classes.”

The workflows varies, but largely rely on a combination of the following Dante-enabled products:

Way said the discussion on how to host classes is still fluid – however, the system will be ready regardless of the final decision.

“We are in a situation where we would be ready to have everyone back on campus or go entirely remote,” Way said. “We’re also ready for a hybrid scenario, where multiple rooms might need to be linked together and have a single presenter broadcast to each location. Regardless of what it looks like, we know we’re going to be able to offer students the very best learning experience possible.”

Way is also utilizing a proprietary USC software platform to be able to maintain control of the system, while still offering faculty intuitive control and classroom scheduling options. However, when it comes to managing the many Dante signals, Way is relying on Dante Domain Manager .

Dante Domain Manager is network management software that enables user authentication, role-based security, and audit capabilities for Dante networks while allowing seamless expansion of Dante systems over any network infrastructure. Way said the flexibility of the system is impressive – noting he expects to manage up to 1,100 nodes of Dante when the integration is complete.

“I wanted to ensure we were as cloud-based and software-based as we possibly could be,” Way said. “By using Dante Domain Manager we’re able to ensure we have complete observability, control and security across the network. And we’re able to utilize it both with the scheduling system we have and with individual instructor preferences. For the most part, faculty will be able to walk in at their scheduled time and the room will be ready for the way they want to teach. With things like Dante’s audio routing at our fingertips, we can set it all up ahead of time.”

Way also noted that because of Dante Domain Manager’s robust security offerings, the system is safe from all nefarious actors – and, the most common issues at a university: curious students.

“Students with knowledge of Dante won’t be able to access the system,” Way said. “Unless, of course, they’re using it to learn and we authorize it.”

Way says he also purchased more than 200 Dante AVIO Adapters to ensure any legacy gear in the workflow would be quickly and easily linked to the network.

Available for analog input or output, or for AES3 and USB conversion, Dante AVIO Adapters allow users to connect their favorite audio gear with any Dante-connected system — delivering the interoperability, performance, and scalability that only networking can bring.

“It’s just another example of Audinate making sure the Dante ecosystem is as flexible as it possibly can be,” Way said. “I can’t imagine trying to do this without Dante and the surrounding technologies Audinate has built for it.”

Way said in addition to the supporting technologies, he also can’t fathom how this project would be done from a financial standpoint without Dante.

“To run a cost comparison would honestly be nearly impossible to do,” Way said. “Because I think the concept of doing it without Dante is impossible. For me to try and even consider the cost of infrastructure and labor for a project this big would simply be a non-starter. It’s not feasible.”

Way said the current project is “close to $2 million” in total cost. An analog build out, he says, would be significantly larger.

“Maybe five times, but likely it could be more,” Way said. “And then what would you do about the flexibility? You’d lose your ability to do a number of things we believe are critical here. The routing of signals would be gone. The ability of faculty to effectively use the system would never happen in an analog environment. It’s just a non-starter without Dante.”

Prepared for the future of education

Way said the result of this approach – going AV-over-IP with Dante at the core – means he is helping to fulfill the university’s commitment to its students: the promise to bring the very best education and resources possible, regardless of any physical limitations.

“We started this off talking about being able to do anything,” Way said. “We wanted to take any signal we had and send it to any location we could imagine. Now, originally, we thought that would just mean any location on campus. But things have changed. We have to imagine bigger now. And by going with Dante originally, we’re ready to go anywhere in the world.”