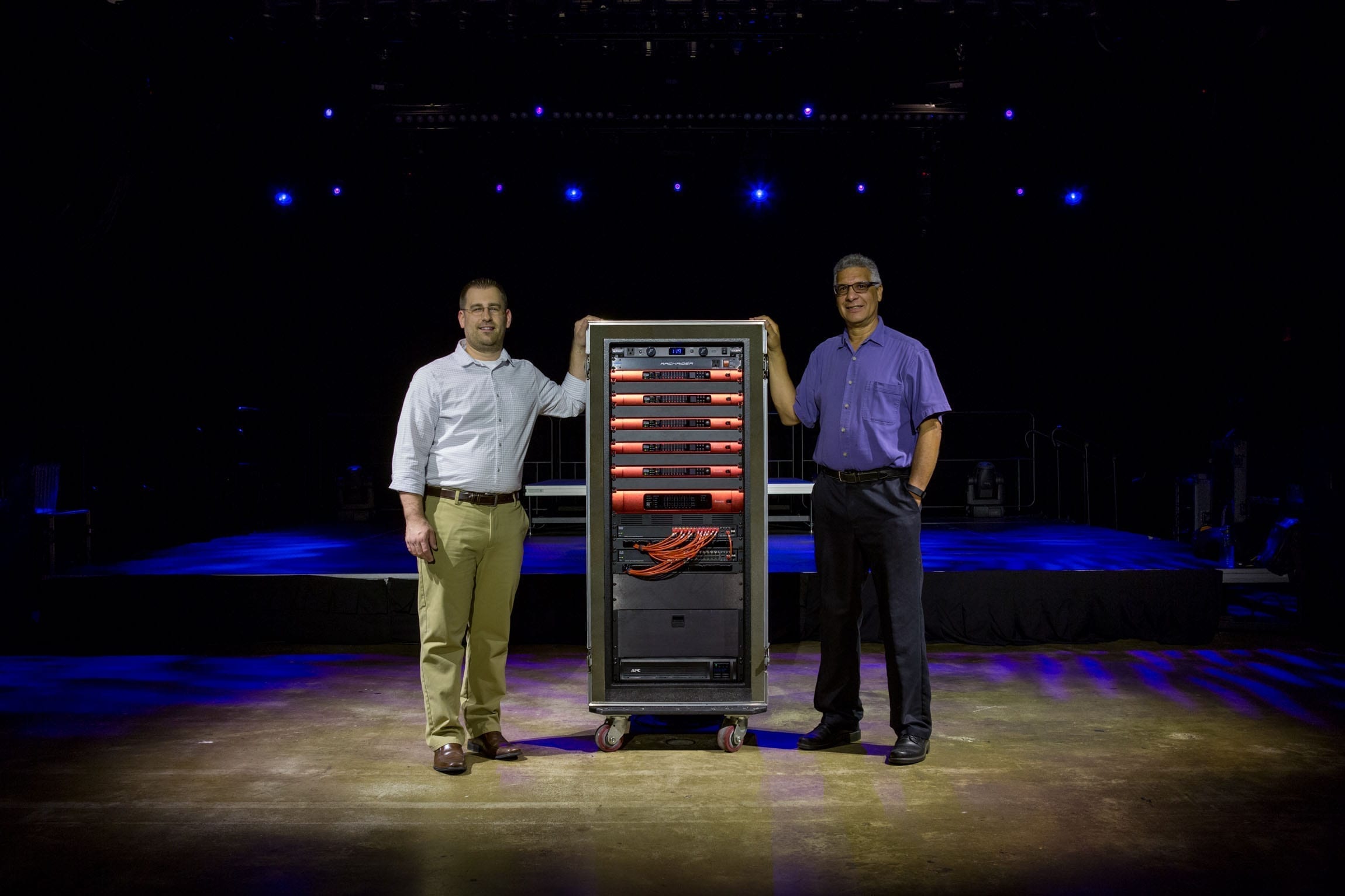 Full Sail Live 1 encompasses a large production space and a variety of ancillary show production-related rooms in a facility where students learn about sound reinforcement, lighting, live video and multimedia, automated lighting, concert touring and audio measurement systems. “We were looking for a solution to connect all those different rooms together over IP. RedNet was that solution for us,” says Vince Lepore, Course Director of the Show Production Systems course at Full Sail University.

The RedNet system allows diverse live audio production equipment from a variety of manufacturers to interoperate on the Dante network, including Yamaha CL5, DiGiCo SD7, SD8 and SD9, and Avid Profile mixing consoles, Lepore elaborates. “We also have a Calrec Summa console that has a Hydra 2 I/O box with a Dante card installed, so that’s on the network as well. And we have Lab.gruppen LM44 and BSS Audio Soundweb London BLU-806 loudspeaker processing on the network,” which in turn feed loudspeaker systems by Dynacord, Meyer, JBL or L-Acoustics, he says.

At the front end of the system, five RedNet MP8R microphone preamplifier units are installed at the stage as a Dante splitter system for the entire building. “All of our sources hit the MP8R head amps, which are controlled by a Yamaha CL5 at our front-of-house position,” explains Lepore. “All of the other rooms within the building are fed gain-tracked splits of those microphone inputs. The audio quality is great, and we’ve had great feedback from instructors and students alike, specifically about the MP8Rs. Those five units are the core of the system.”

In that same rack is a RedNet 2, which enables audio to be returned to the stage from any console or other audio device on the Dante network. Three RedNet D64R interfaces are in place to convert Dante audio channels to MADI for input into the DiGiCo consoles.

Lastly, he says, “We have a RedNet 2 unit in our video control room that takes sources from the video control room, such as playback feeds, and puts them onto the network. They are then available to all the different consoles throughout the building.”

Lepore comments, “The flexibility of the RedNet system overall has been really tremendous. More than anything, the scalability is really nice. I see this as just the start to the system; it can grow with us.”

There was previously an AoIP networking solution installed at Full Sail Live 1 according Mark Johnson, Program Director, Show Production Bachelor of Science degree program at Full Sail University. “We had some reliability issues, so just getting the RedNet solution in place was a real benefit for us. The bonus was that it is a contemporary, well-known networking system that is used prominently in the professional industry. It works for us in a practical way, so that we can get signals from A to B and have the systems talk to each other. But it’s also the perfect vehicle for teaching about networking and about Dante. The students are really thrilled about the application and the ability to learn new technology.”

Approximately 200 students pass through the Show Production Bachelor of Science degree program every year, says Johnson, and every single one gets hands-on experience with the RedNet system and Dante networking. “It’s a 20-month program and when you get out at the end you’re equipped with a solid skillset in production in general.  Even if you’re interested specifically in lighting or audio or video, you get exposed to the whole program offering. That gives you an advantage once you get out in the field, because you understand how the other guys are working.”