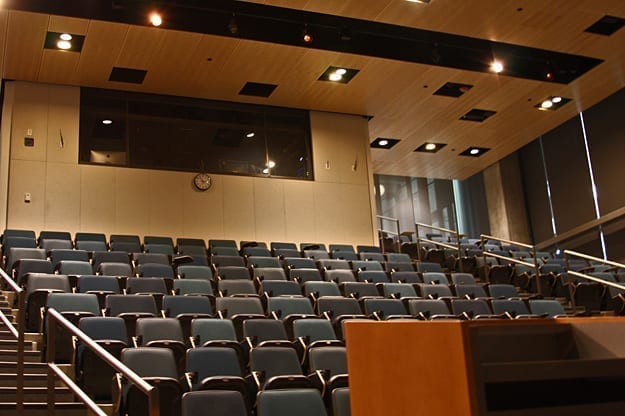 Harvey Mudd College, a Claremont, California-based private college, is leveraging a Dante network from Audinate to power a multipoint AV conferencing network in the new R. Michael Shanahan Center for Teaching and Learning. Among the many technologically advanced features in the new educational center, the conferencing network gives facility guest lecturers the opportunity to reach larger audiences across multiple networked rooms. By installing a multichannel audio Dante network, Harvey Mudd College has established a simple yet sophisticated foundation for future expansion while reducing ongoing costs and labor – all equating to exceptionally low total cost of ownership.

Harvey Mudd College refers to the new conferencing system as a “simulcasting network,” offering two-way audio and video communication between the 300-seat auditorium, a recital hall and five classrooms.  The simulcasting network was established specifically to support the unpredictable changing pedagogies and learning styles of the modern connected campus. The Dante based network solution incorporates a wide selection of interoperable AV products, giving the college a flexible and intelligent solution for the multipoint architecture.

While the original design specified AVB and CobraNet for networked audio, implementing the hodgepodge of technologies proved less than ideal. The overall system was driving up costs and maintenance, and generally not performing to its potential.

“We’re a Cisco house for network switching, and it required a lot of extra labor to make the auditorium-to-classroom networking work with AVB,” said James Sadler, instructional media specialist. “We had to hardwire feeds to the processing equipment in our remote classrooms, and add special network switches. The CobraNet network was localized to the auditorium, but there were serious complications with network bandwidth, audio dropouts and signal latency.”

The original installation included a Biamp Tesira solution for all digital signal processing and amplification.  The introduction of Biamp’s Dante Interface Card for Tesira allowed Harvey Mudd College to seamlessly migrate the simulcasting network to Dante. While migrating to Dante, Sadler simplified the overall network architecture by transitioning all network switching to the existing Cisco infrastructure, eliminating the need to buy additional networking hardware or specialized switches. Sadler eliminated the CobraNet network by adding a Dante MY-AUD-16 module to an existing Yamaha O1V96v2 console in the auditorium’s production booth.

According to Sadler, the Dante migration took “about 15 minutes,” with plug and play connections further simplified by adding Dante-enabled Attero Tech I/O wallplates to the network. The compact, high-density Attero Tech I/O plates were added to an electrical floor box directly beside the speaker lectern in the auditorium, enabling a clean handoff to the DSP system instead of requiring physical wire connections and special switches.

Harvey Mudd College now has the best of both worlds:  powerful DSP and amplification for all connected rooms, with increased reliability and flexibility for moving high-quality, multichannel audio over the network. The Biamp system is expandable along with Dante to ensure plenty of capacity for expansion. The infinite scalability of Dante will allow Harvey Mudd College to extend the network into other spaces as needed.

“There is nothing complicated with this system, starting with the ease of setup that made transitioning to Dante a very time- and cost-efficient process,” said Sadler. “We’ve removed the limitations of connecting to the network from the front of the auditorium. We have all the processing power and I/O capacity we need today with the Biamp system, and Dante feeds uncompressed audio to every room with virtually zero latency.  The entire network is easier to configure, easier to control and easier to grow.  With Dante we have reached the point where we plug almost anything into a network port and get beautiful audio quality in and out.”

Moving forward, Sadler intends to explore using Audinate’s soon to be released Dante Via networking software to move audio, including Skype feeds, to and from student laptops. Dante Via removes the requirement for professional hardware, enabling a media networking platform using standard PC or Mac computers.