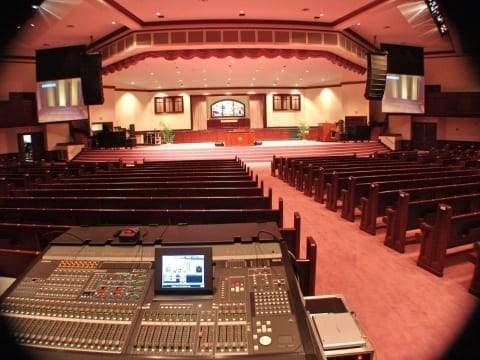 Hylton Memorial Chapel is a nondenominational Christian Event Center that opened in 1995. The facility does not accommodate a local church or congregation on a regular basis. It seats nearly 3500. The facility was designed to host large Christian events and facilitate renewal throughout the region.

"We actually haven’t needed much support. All we did was turn the processors on and connect them. Network setup was automatic — the processors just said ‘Thanks, we’re done, we’ll get out of the way now.” - Greg Lukens, Washington Professional Systems

Keeping an eye on the future, this installation requires that the audio networking solution be scalable, ease to install and future proof.

The upgrade turns the venue into a world class performance space, with 7 Meyer line arrays in soffits and 24 additional loudspeakers in around the balcony, with the ability to bring in additional line arrays for larger performances. Handling this many channels of audio with high reliability, low latency and easy configurability was key to any decision. Also important was that the system not be locked into legacy technology but rather look forward to ongoing advancements. 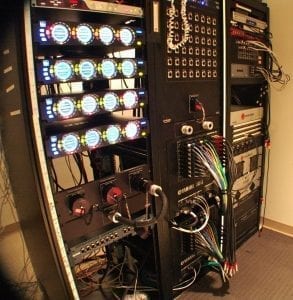 A Yamaha PM5D was selected for Front of House, connected via 8 AES outputs to the primary Dolby Lake Processor. This processor was networked with 4 other processors using Dante over standard CAT5 Ethernet cables. One of these processors was at the end of a 300-foot CAT5 run up in the balcony, which was not an issue because Dante runs on IP standards, guaranteeing proper operation over Ethernet.

Setting up the Dante network was “undaunting” Luken reports. “All we did was turn the processors on and connect them…I think it took us longer to plug in the Cat 5 cables than it [Dante] did to configure the network”.

The Dante audio networking solution made installation extremely easy and significantly reduced cabling costs when compared to AES or analog options. Plus, the fact that Dante is a scalable solution that can works on both 100Mb and Gigabit networks and supports newer technology standards were crucial in cinching the deal for Washington Professional Systems.