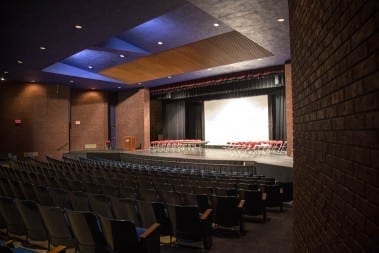 Jefferson College, located in Hillsboro, Missouri, recently upgraded its sound reinforcement systems with Dante-enabled amplifiers in two locations on campus: its 2,500-seat field house and its 300-seat theatre. The field house is used to host sports events and large assemblies. The theatre, on the other hand, is used for drama, dance and music performances.

The new front end for the theatre consists of 10 Sennheiser evolution 300-Series wireless systems and a Sennheiser MEG 14040 microphone, along with existing microphones, all of which feed via Dante-networked audio channels through a Harman BSS BLU DSP. This allows for a complete standalone system operation exclusive of the Allen & Heath GLD-80 mixing console. System control is via the Harman HiQnet Motion Control app on an iPad and integrated BSS Contrio Keypads. All Dante network audio channels also feed the GLD-80 as a front-of-house mixer for use during larger events. The system can be further expanded when additional channels are needed through the addition of the Allen & Heath AR2412 portable stage rack.