The recently built Theatre Des Sablons in the Paris community of Neuilly-sur-Seine brings a new performing arts venue to an area of the city already rich with culture. The multipurpose venue includes a large theater, an intimate auditorium and a conference space among other common areas. The technical design includes a world-class digital media infrastructure to support classical and contemporary dance, theater, circus, concert and opera performances; as well as corporate events.

Ndiongue worked with contractor Audio Equipement and distributor DV2 to develop the complete solution, with a focus on three key criteria: reliability, architectural simplicity and sound quality. The team briefly considered CobraNet as a network transport, but quickly recognized that Audinate’s Dante™ media networking solution was the right choice, surpassing the needs of all three requirements.

It became clear early in the design phase that reliability was a priority considering the reach of the system, which expands beyond the performance areas.  This includes a network extension into the main bar to deliver bells and public announcements in advance of a performance’s commencement. Ndiongue concluded that Dante also offered the most cost-effective solution for reliably distributing all audio events between the various spaces.

“We established two Dante paths for dual-redundancy throughout the venue,” he said.  “With analog, if a cable is lost there is a hum, or an absence of sound.  With Dante, the secondary network picks up where the primary network leaves off.  And as a digital network we found it to much more reliable than CobraNet for redundancy in our testing.” 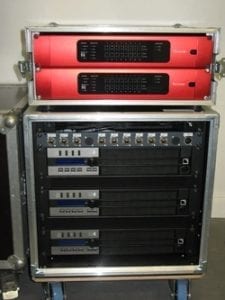 Neuilly-rednetSound quality was an emphasis given its stature as a performance venue.   Ndiongue and Audio Equipement built a world-class audio system comprised of Yamaha CL5 consoles and Yamaha RIO stageboxes, Lake LM44 digital audio processors and Lab.gruppen PLM10000Q power amplifiers, along with Focusrite RedNet 2 IP audio interfaces.  The entire audio sound system is Dante-enabled through to playout, where Adamson loudspeakers and subwoofers produce pristine, full-range audio for performances and events.

Having Dante inside the majority of these products helps the theater retain digital audio integrity through the entire distribution chain.  Ndiongue notes that the LM44 is especially ideal at the processing layer, where guest engineers never have to touch the crossover or EQ pre-tuned for the system.   He adds that eight Focusrite RedNet 2 interfaces delivered high-quality audio to the monitor amps and other common areas, displacing expensive analog cabling.

However, Dante plays a more critical role in channel capacity, supporting high-density signal distribution across the digital audio network.  With Dante inside, the three Yamaha RIO stageboxes in the main auditorium accommodate 96 inputs and 122 outputs.  The theater uses Cat5 for all audio distribution, with six gigabit Cisco switches to support the various destination paths.

“We run everything through Dante, we have audio everywhere and we have never had a problem,” said Ndiongue.  “Having Dante inside the Yamaha consoles and stageboxes eliminates all analog cabling to the front of house position.  All inputs and outputs are located on stage.  It is all digital networking, and it gives us tremendous flexibility.”