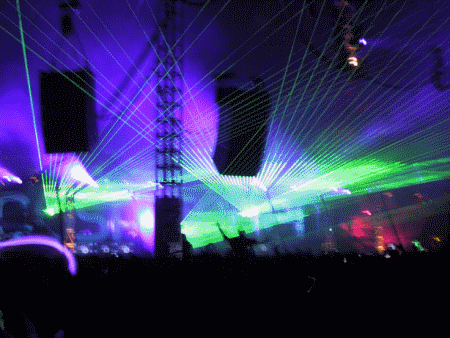 To distribute professional quality audio across the whole venue, Britannia Row needed a high quality digital networking solution that could offer sample-accurate synchronization and sub-millisecond latency. They found that solution in Dante. Prior to the tour, Britannia Row had been testing Dante and putting XTA’s Dante-enabled breakout box through its paces. Testing wrapped just before the tour was to start and the results of the testing were excellent. The timing couldn’t have been better. Britannia Row decided that for the Oasis tour they were going to transport audio over Dante and then breakout using XTA’s Dante-enabled breakout boxes.

At the tour, Dante was used to send signal to the stage and main PA. In addition, Britannia Row used Outline Butterfly delays that were driven using XTA’s Dante-enabled breakout boxes. Optical connections were used between network switches and delay towers. In each delay tower amp rack there was an XTA breakout box converting Dante’s digital signal into analog and sending it to the loudspeakers.

Britannia Row’s head of digital and RF, Kieren Walsh said "We were running internet up there and amplifier control back down, all on the same fibre optic and it worked great”.

XTA’s Richard Fleming added that Britannia Row used Dante over fibre optic because you can go for literally kilometres with no signal degradation. One of the big things that Kieran noticed was how much better some of the loudspeakers sounded with the audio delivered over a digital network, because you haven't got the degradation of a copper multicore.