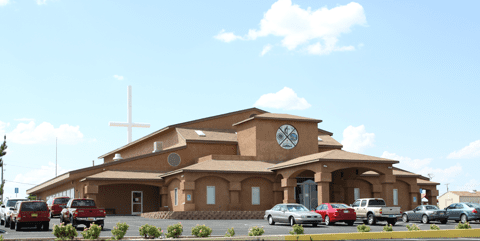 The church’s vision is enhanced at worship services and special events through a modern, networked AV system that delivers live music and sermons to several locations on campus.  The strategy behind the design also establishes an intelligent architecture to simplify future expansion as the church grows to new areas.

The main sanctuary at Rio Rancho is 55 feet wide, 115-feet deep with an awe-inspiring 29 foot ceiling, and features a large stage area near the altar to accommodate the choir and praise team for traditional services.  However, parishioners also have the choice of enjoying contemporary services that feature a live, mobile band that often changes location.  The previous system’s limited number of inputs made audio production for the contemporary band quite a challenge.

With gradual expansion over the past two decades, sound quality eventually was degraded, mainly caused by poorly managed electrical systems that caused grounding issues across the property.  To accommodate growth, Rio Rancho was faced with a complex and costly cabling and wiring projects to eliminate these noise problems and other audio quality issues.

“We have a long-term goal to build a family center in a separate building to house and expand our daycare operations,” said Gordon Moore, a parishioner at Rio Rancho United Methodist in charge of technical ministries, who also is the VP of Sales for Lectrosonics.   “We also needed a way to send audio to our youth center, which doubles as a ‘cry room’ for families with young children.  It would have been very challenging to accommodate such expansion with our legacy system.  We needed a new system to lay a foundation and give us the freedom of development.”

Moore and his colleagues at Lectrosonics, which also acted as the systems integration team, designed a Dante networking solution that would meet and exceed these challenges. 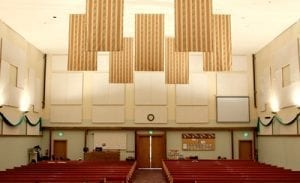 As a result of installing Dante, the solution provides Rio Rancho with reliable performance, operating flawlessly since it was installed during some trying situations. Moore and his team first focused on the stage, installing seven floor pockets with eight inputs apiece.  The team built a 56x20 Aspen system based on Lectrosonics DSP gear, providing 56 available inputs on stage, each with an individual preamp – and all routable with Dante.  This networking flexibility stands among the chief Dante benefits for the Rio Rancho project.

“Dante is very simple to set up, and the topology of the network is irrelevant once you tell each node what signals it should transport and receive,” said Moore.  “It doesn’t matter if you need to change cables or reroute signals.  The audio still shows up where it is supposed to arrive.”

The complete system includes remote software to create a 24-channel submix and over the Dante network, route the audio to the sound booth in the back of the church.  Fourteen channels of audio are distributed to the equipment room, where signals are broken out for speaker processing and in-ear monitoring.  Moore notes that Dante requires only a single Cat6 cable to achieve this incredible flexibility in audio networking.

“We removed 3000 feet of old audio cable and replaced it with 150 feet of Cat6,” said Moore.  “This saved the church significant cabling labor costs.”

Dante extends into an amplifier room, where line level audio from legacy VHF wireless microphone receivers is fed into the network.  All audio from the Dante network is processed through an 8x8 breakout box and fed to the four amplifiers – delivering a very high-quality audio experience for parishioners attending both traditional and contemporary services.

Moore credits Dante for other sound quality improvements related to the electrical systems and shorter cable runs.  The church has expanded three times over the past 30 years, resulting in four separate electrical service entrances.

“Churches tend to grow incrementally, and the introduction of new electrical systems creates horrible ground loops,” said Moore.  “Dante breaks those ground loops by eliminating a great deal of equipment that we would otherwise have to put in to prevent the associated noise interference.  We also don’t suffer the high-frequency losses and impedance issues we experienced over the longer cable runs.

“We have been very careful with the acoustics in the overall design, but I attribute the added punch and clarity to Dante because our upper frequency response is much cleaner,” he adds.  “We get nothing but compliments from visitors about how good our audio system sounds.”

Moore stresses robustness and reliability as two important Dante benefits. He points to a recent lightning strike that took down lighting, phone, computer and audio systems throughout the church – with Dante as the exception.

“Literally everything in the building with silicon was offline, yet the Dante Brooklyn II card in our Aspen system reported for duty without requiring a reboot,” said Moore.  “Dante has been running unimpeded since the system went online in July 2012.  It has never failed, and we have had no interruption to our audio.  That is pretty amazing to me especially since we built minimal redundancy into the end-to-end architecture.”