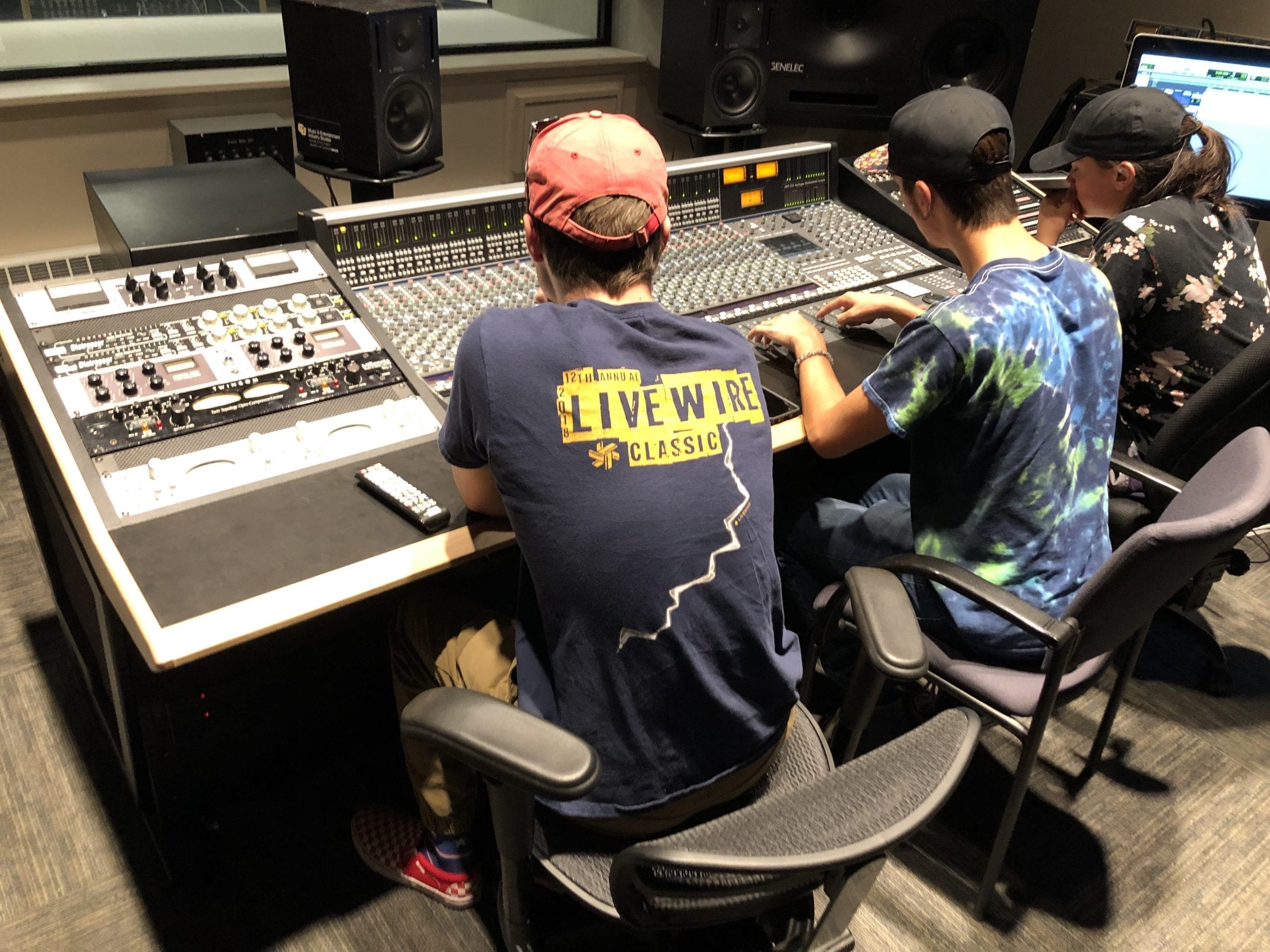 Located in the heart of the city, the University of Colorado Denver provides a traditional college experience in a modern urban setting. Within the College of Arts & Media, the Music & Entertainment Industry Studies Department (MEIS) offers a series of programs focused on contemporary music styles, commercial music business, and music production.

Students choose from degree emphasis areas that include Music Business, Music Performance, Recording Arts, and Singer/Songwriter. Each is designed to prepare students for a variety of careers in the arts and entertainment industries. From production to performance to studio management, MEIS alumni have gone on to work in a wide range of industry careers — and some have even won Emmy Awards.

Scott Burgess, the Manager of Recording Labs and Live Sound, and a Lecturer for the Department of MEIS, explained that each semester, the school has about 250 Recording Arts majors (out of a department of about 550), who use six primary recording studios, and a mix of live rooms, three performing venues, and several post-production spaces.

"We teach a variety of skills in our recording program designed to help students prepare for gigs in the live and recorded music industry, as well as in film and television and sports media, so technology is crucial for us," said Burgess. "We started using Dante in our department a few years ago to reduce setup times for events, but it's such an important technology that achieving Dante Level-One certification is now part of our curriculum, and we're looking to expand that."

Dante as a matter of course

Dante is a complete audio networking solution and the de facto standard for digital audio networking. With Dante, universities dramatically reduce their analog cabling by sending hundreds of audio channels over a single ethernet cable. This saves significant time and money without compromising on quality. Because Dante distributes uncompressed, multi-channel digital audio with near-zero latency and perfect synchronization, users experience pristine audio quality with no interference and no ground hum – even over long distances.

Dante also provides unmatched flexibility by allowing for channels across the network to be changed with a click of a mouse. No more physically plugging in heavy, point-to-point analog cabling. Dante’s intuitive user interface and network management features enable even the most complex networks to be set up and configured quickly and easily.

Burgess first worked with a Dante network as part of the recording leadership team for the Aspen Music Festival and School in mid-2015, and by the end of that summer had become “a true believer in Dante connectivity," with the realization it “could solve many issues for our campus studios."

One of the first ways Dante was put to use on campus was to ease operations in setting up rooms for recording live performances. Because of the school's busy schedule, Burgess and his team often only have a window of about three hours to set up their audio equipment from scratch before the doors open.

"Our setup times are very limited, so anything we can do to save time is a big deal," said Burgess. "So, I got a Dante card for our Soundcraft mixer and a license to Virtual Sound Card, we plug in one network cable, and we're ready to record the event! That's how we started."

Most of the work with the music department audio network is managed by a student crew. The ease of use and flexibility of Dante allow students a way to efficiently connect and mix/match resources within rooms and studios for the project at hand.

The MEIS team uses Dante extensively for rehearsals and live performances. Twice a week, there are two live acapella ensembles that need support, and the students only have about half an hour to set up a sound system with 12 wireless microphones.

The MEIS production team realized quickly that Dante was a big step forward for their workflow, and they began to think of ways to incorporate more audio networking on campus, including using it to connect their six main studios, which are spread across two large buildings.

Burgess explained that the university has its IP network throughout the system, and the MEIS Department now has its own network as well for specific use.

"If we stay within our department's pod of rooms, we can do whatever we want, but if we need to get out into the hallway, then we have to bring in the campus IT folks, which makes it a little more involved and takes their time," said Burgess. "So, we ran our own wiring just to have a clean network for the stuff that's within our main studio complex.”

That said, Burgess also has times when he must utilize Dante in other buildings. A few rooms the department utilizes are not in proximity to the rest of the studios and events are often produced in areas or venues outside the music department.

The CU Denver campus covers a lot of ground, and if the team is asked to put on a show in the Student Center, for example, the ability to jump from the departmental network and onto the campus network is a significant capability. The challenge with making this jump to another subnet, traditionally, was a work order needed to be filed with IT to trigger a process that would eat up the resources of both his department and the IT department. But with Dante Domain Manager, that process is now unnecessary.

Burgess added that in addition to connecting mixers and stages, and rooms and studios, there is also a set of Pro Tools-based student workstations and other production areas and equipment the team is bringing onto the network.

"We have a variety of Dante-enabled interfaces now, including a good set of Focusrite equipment as well as Thunderbolt interfaces that tie to our Pro Tools workstations," said Burgess. "Our most significant recent acquisition is a new Dante-enabled Studer digital mixer, which is an amazing board. We're very excited about having it here and having it fully networked."

Dante opening up the curriculum

Over the next few semesters, as part of the expanding networked audio curriculum, the MEIS team has the goal of being able to produce a live concert in a venue anywhere on campus, and then record that band or event from several other rooms at the same time - each with different purposes in mind. Perhaps splitting a class of 25 students into teams: one with a focus on creating a broadcast-style mix, another on mixing for web broadcast or social media, and another mixing for a multi-channel theater or immersive audio production. The idea is for everyone to grab a mix and then upload them to the server so the teams can compare notes and see how everyone did.

"We're still mulling over all the possibilities, but we're in the middle of implementing a major rewrite to our curriculum, so it's a perfect time for us to explore all the possibilities of the Dante network," added Burgess. "Dante is part of our workflow and infrastructure now, and it's an important part of our curriculum. I've had alums come back and say that that they are really glad we have a focus on networked audio because in the real world, they are up to their ears in Dante, making the experience here very valuable."