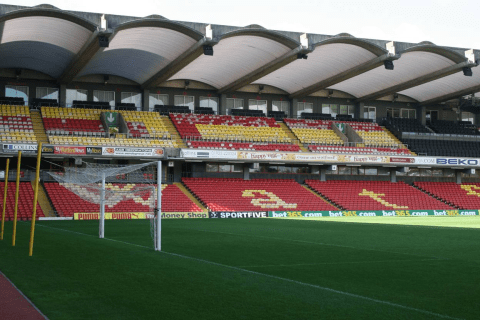 To update an aging and unreliable PA system that not only can have the ability to make announcements during game play but to also comply with all relevant standards and legislation relating to mass-notification and voice alarm in sports venues. It was necessary to supply a system that provided sufficient coverage for the ground, improving the audio performance in the bowl area (the pitch and stands) for sports presentation.

Watford called in respected system designer Roland Hemming of RH Consulting, who worked with Sennheiser UK to specify a system that could cope with every eventuality.

Hemming’s solution comprises a combination of DAS Audio RF series loudspeakers for the bowl and DAS Arco for the under balcony and a bar areas, all of which were specifically modified for the project In total, the system uses over 200 loudspeakers and is split into 20 zones On site installation took nine weeks, and was performed by E-Mech Entertainment Engineering (with Huw Micklewright), with the existing PA/VA system remaining in place and connected to the new amplifiers and loudspeakers during the process, allowing 100% uptime of the PA/VA system during the transition from old to new.

When it came to deciding on how to control and power this extensive loudspeaker installation, Hemming opted for a familiar configuration that utilized the individual capability and compatibility elements of Peavey MediaMatrix NION n6 and PLM Series, Lab.gruppen’s flagship Powered Loudspeaker Management platform.

Among other notable benefits, the deployment of PLM Series meant the new system could be designed around Dante – viewed increasingly as the new ‘de-facto’ low latency digital audio network protocol – given that the PLM Series is fully capable on this front.

"We have a nice touch-screen display that shows us all of the 20 zones, and Dante allows us to use one system for monitoring and control. There are no latency issues, no issues with bundles that you might have with Cobranet, and all in all, it’s a very simple network.”