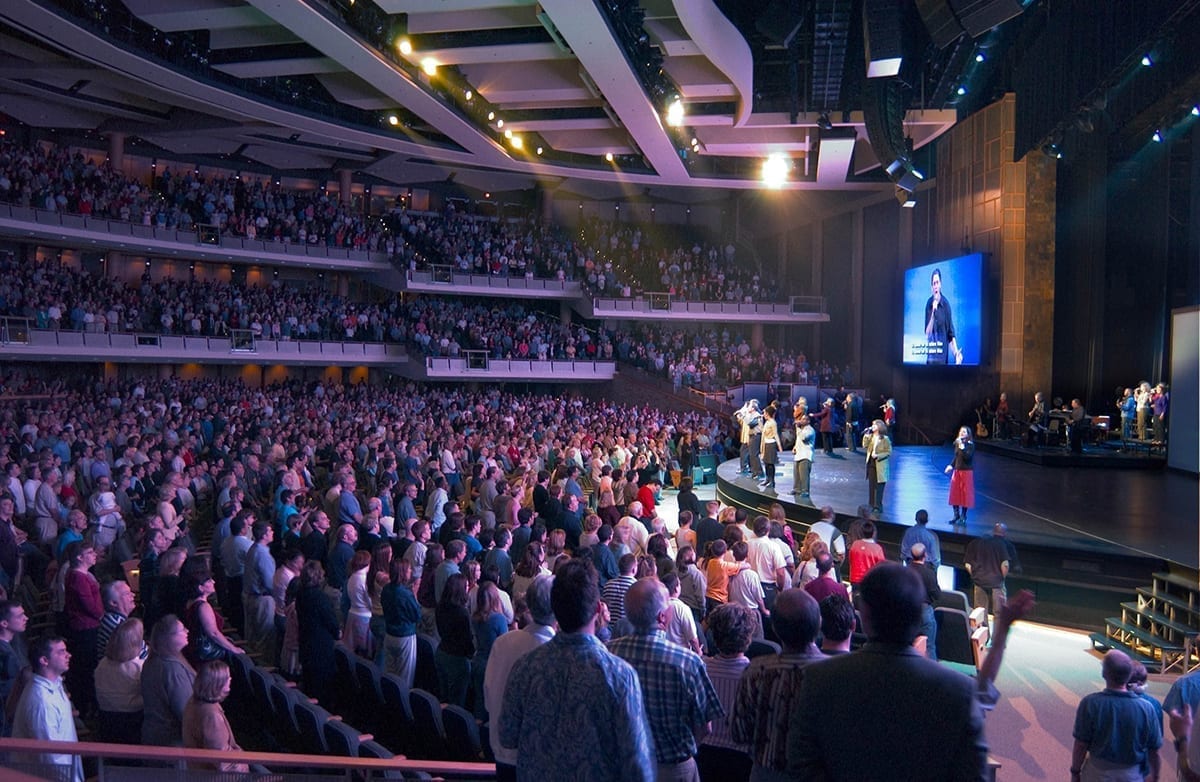 Willow Creek Community Church is an interdenominational community of seven worship facilities in the greater Chicago area. The main church in South Barrington, Illinois, founded in 1981, serves as the core location for distribution of video and audio content to the church’s six satellite locations.

Inside the South Barrington church, the Willow Creek staff is in the midst of a massive technical transformation. At the core of this transformation is a Dante network from Audinate to simplify the process of routing, distributing and managing multiple audio channels across four distinct venues on campus.

During the design phase, the Willow Creek team determined they needed to solve the problem of intelligently distributing high-quality audio – notably, live musical performances and sermons – to nearly 20,000 congregants every week. Since these events take place in the 7200-seat main auditorium, Willow Creek first needed to ensure that high-quality sound was audible from the main level up to the mezzanine and upper balconies.

Furthermore, the church needed to ensure that spaces such as the Activity Center – a large, multi-purpose space used for worship, meetings, religious instruction and live performances - was able to receive the same live audio feeds with the same exceptional quality. Given the size and scope of the project, it was clear that routing audio the old way via analog snakes and patch bays would be a costly, time-consuming and highly complex undertaking.

For Matt Wentz, audio systems engineer at Willow Creek Community Church, there was little doubt that digital audio networking would address the labor and cost concerns of deploying a system of this scale. And for Wentz, Dante was the only solution that could do the job right.

“We didn’t even look at other networking solutions. I knew immediately that I wanted Dante,” said Wentz. “No other networking solution provides this much flexibility to route audio from any room to any room. And the fact that so many audio equipment manufacturers have adopted Dante technology opens up a world of possibilities for how we can seamlessly configure our networks.”

By installing Dante, Willow Creek Community could leverage a standard IT network and lightweight, low-cost Cat6 cabling throughout all five distinct venues on campus, thereby vastly reducing the costs and labor associated with building out an audio network.

The Dante network crosses the front-of-house mixing area by the main auditorium 94-foot stage, with multiple channels coming in and out of a Yamaha PM1D console. The high-capacity Dante architecture in the main auditorium ensures that Willow Creek can take advantage of a wide array of audio sources, including 160 audio inputs from the stage; and dozens of wireless microphones and in-ear monitors. The FOH mixer’s output is converted to digital by Dante-enabled BSS London Blu-806 signal processors. The Dante signal is then sent over the Dante network until it reaches the loudspeaker management system. Additional BSS London Blu-806 units decode it back to AES/EBU for use by the public address (PA) system and monitors serving the tri-level auditorium.

The network cross all four other venues at the church, including the Lakeside auditorium, the Activity Center and the Chapel, each of which is its own Dante-enabled Cat-6 audio island with Yamaha digital audio mixing. Dante efficiently and reliably routes audio between the four venues, which are interconnected via a fiber optic network, centralized Cisco SG-300 fiber switches and an Auvitran Audio Toolbox with seven AxCDante cards. The Activity Center system includes a 48-channel Yamaha M7CL digital mixing console equipped with Dante cards and a Yamaha QL console, while the Chapel and Lakeside venues utilize Yamaha CL consoles. The Dante cards convert the output of the mixers, enabling a seamless interface with the Dante network.

Wentz adds that these systems can be easily expanded to support higher channel counts by adding more Dante cards. That flexibility just hints at the scalability and ease of use when it comes to managing the Dante network.

“Back in the old analog world, it was difficult to change the routing and network configurations for each of these individual rooms,” Wentz said. “We’d have to stop and think what that best signal paths would be and then test it out. Now with a single Dante pre-set recall, the room is automatically re-configured to whatever new setting we need. From a consistency standpoint, Dante is very intuitive with its matrix layout.  We patch something and are notified immediately that it’s working. There are multiple places to confirm where audio is going to or coming from, which is a significant benefit. The Dante Controller is a huge timesaver through smart features, including presets that memorize preferred set-ups for each of the four worship venues here at South Barrington.  There is incredible flexibility and consistency with Dante.”

Besides the Giga-Church in South Barrington, Willow Creek Community Church has Mega-Churches in Huntley, Crystal Lake, North Shore, Wheaton, and Downtown Chicago. The Wheaton Mega-Church is the first of the regional campuses to transition to a Dante network, with others to follow.  Moving forward, Wentz will explore adding Audinate’s soon to be released Dante Via software at some of the locations, eliminating some infrastructure in favor of routing audio “from computer to computer and keeping it all in the digital world,” he said.