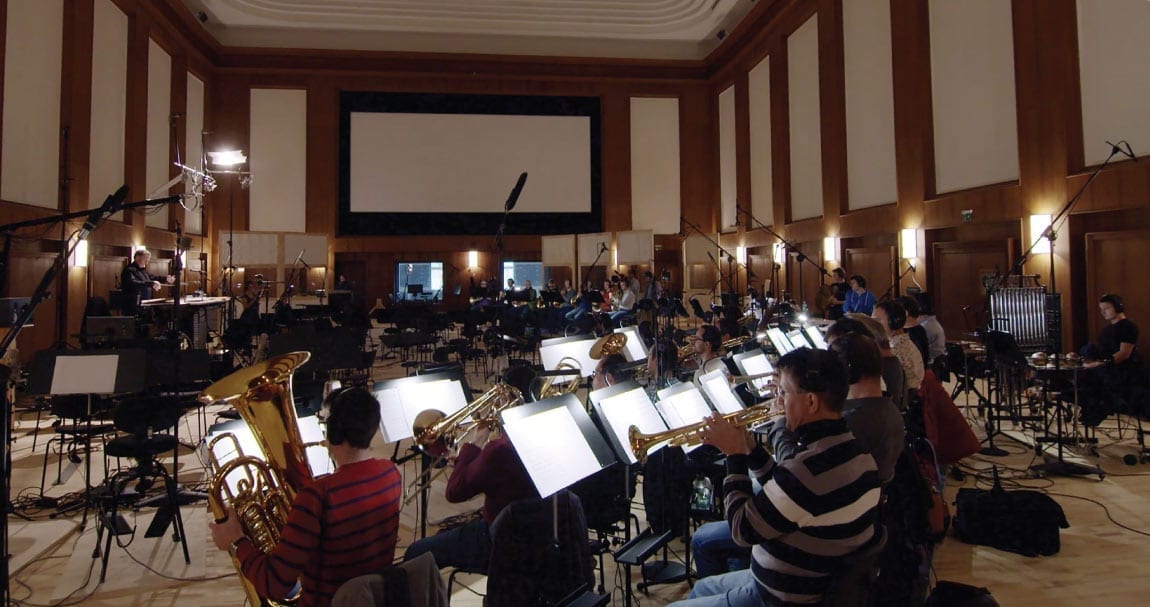 The original ambition was to build an unrivalled orchestral production facility that could accommodate traditional large-scale recording and mixing, film scoring, modern production and workflow approaches, and VSL itself. The project occupies an original 1940’s scoring stage and production facility in Vienna which has been completely refurbished. The studio has an impressive central 540m2 Stage A with a large control room, a second ‘B’ live room and control room, plus more than twenty additional spaces to accommodate production and client facilities, including offices and edit rooms for the Vienna Symphonic Library itself.

A primary technical ambition for this facility was ultimate flexibility - to connect every room to every other room, including the VSL offices, without compromising audio quality and allowing straight forward ad hoc configuration depending on client need. Every audio channel should be available anywhere in the building. The facility was to be able to operate at 192kHz throughout with the ability to incorporate lower sample rates as required. The consultants on the project, TSAMM Professional Audio Solutions, suggested Dante networking as a solution. Dante’s distributed routing, plug-and-play discoverability, high channel count, and simple, efficient PTP clock scheme were the key attractions - allowing the facility to easily adapt to any workflow.

SSL Duality Delta consoles were chosen for the A and B control rooms (96 channels and 48 channels). Consistency between rooms was important to the team, as was the combination of the Duality’s clean, SuperAnalogue sonic foundations and the unique tonal flexibility of its VHD (Variable Harmonic Drive) inputs, as tonal flexibility was deemed particularly important to traditional scoring clients. In addition, an SSL L500 digital live console was specified as a monitor mixer for the central orchestral live room where its uncompromised, uninterruptable audio and high path count, together with the advantages of snapshot recall make it a perfect fit.

A total of 33 SSL Network I/O MADI-Bridge units and 18 Alpha-Link MX audio converters are deployed in the system. All A/D and D/A conversion into and out of the Duality consoles uses SSL Alpha-Link I/O units. Each Alpha-Link pair (Duality channel outputs and monitor inputs, and bus outputs and returns) is connected to an SSL MADI-Bridge, which does the redundant bridging and (where necessary) sample rate conversion to and from the Dante I/P network.

Although SSL Live consoles can have optional integral Dante interfaces, within this project SRC from the SSL Live’s maximum 96kHz operation to 192kHz on the Dante network was required so MADI-Bridges also take care of digital transport and conversion to/from the L500 console via MADI.

MADI-Bridges and nine SSL Delta-Link MADI HD Pro Tools® interfaces are also used for five Pro Tools workstations running at various sample rates, connected to, and fed from, the Dante network. Computers running Dante Virtual Soundcard and/ or other Dante enabled I/O devices are used for production suites, and for the Vienna Symphonic Library offices. Primary routing and labelling is achieved using Audinate’s Dante Controller software, which can be running simultaneously on multiple PC’s connected anywhere on the network.

The basic physical I/O provision of the completed studio is around 1000 channels, though the network has plenty of headroom, allowing for additional Dante-enabled devices to be deployed as required.

On test, a complete trip through the system - from a microphone on the main stage, A/D (Alpha-Link), MADI-Dante Bridging onto the network and then a monitoring return through another MADI-Bridge, through the L500 console to analogue monitoring at musician’s headphones was clocked at less than 0.7ms. Bernd Mazagg, Technical Director & Chief Audio Engineer, praised the performance of the SSL Network I/O MADI Bridge saying “It’s one of the fastest network devices I know.”

Initial recording tests at the facility were undertaken with full orchestra, and attended by a number of influential film music personalities, including Conductor and Orchestrator Conrad Pope, and Music Scoring Mixer Dennis Sands. The Duality pre-amps were preferred for most inputs, with the console’s VHD circuit used to add just the right amount of colour to certain inputs. Bernd Mazagg, Technical Director & Chief Audio Engineer, commented: “For me it was quite amazing to hear the complete studio for the first time… I was nervous. I knew that it could sound really good, but when I heard the Orchestra playing through the speakers, and through the whole signal path for the first time it was simply amazing... It was much better than we’d hoped it could be.”