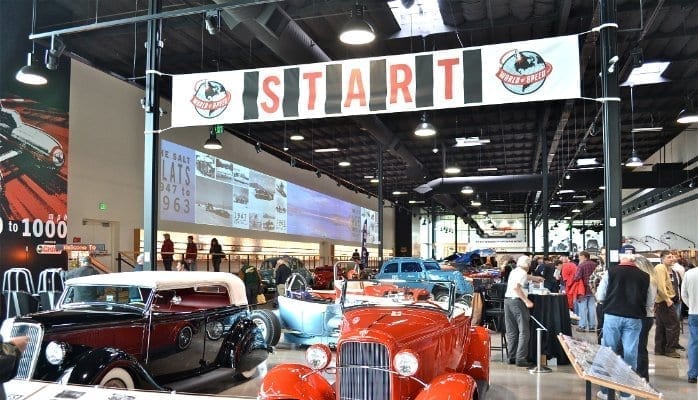 The World of Speed museum, located near Portland, Oregon features classic race cars, motorcycles, and boats, along with a wealth of educational exhibits and hands-on activities. Inspired and informed by the racing tradition of the Pacific Northwest, the nonprofit museum offers automotive classes, race car simulators, and interactive exhibits, as well as event spaces.

“Currently the museum has 11 spaces, and they are expanding,” relates Michael Sanders of Portland-area systems integrator Delta AV, which designs and installs the facility’s AV systems. “We initially looked at the museum’s system as a whole and went through each system individually and broke it down into its components. We then designed an AV system that could be controlled from a touch panel or iPad app from pretty much anywhere in the facility. We made it as future-proof and expandable as possible.”

The building already had CAT5 Ethernet cable throughout, which gave Sanders’ team an advantage.

“We are controlling multiple systems with Symetrix Radius DSP, which interfaces with Dante networks,” Sanders explains. “Leveraging the existing network cabling, we installed Dante boxes around the facility, which enables the museum to have a press feed or to plug in from remote locations. We worked closely with the network contractor to build a VPN that lives on their network, but is mostly separate from it. That allowed us to use the Dante network and any of the controls so that anything we’re doing, including video and audio transmission, is on the existing network.”

Symetrix Radius 12x8 EX DSPs are at the heart of multiple systems in the museum. For an exhibit about Utah’s Bonneville Salt Flats, where land speed records are often broken, the museum staff wanted to show a car speeding across the salt flats. It’s accomplished with an eight-projector video wall spanning 130 feet wide by 12 feet tall that displays an image that scrolls across the entire width of the screen. A Radius 12x8 EX DSP manages eight audio zones so that as the image scrolls, audio signals “travel” along with the image, giving an aural, as well as visual, representation of a car hurtling across the Salt Flats.

The Bonneville exhibit is just one of many ways the facility uses Symetrix Radius DSPs. A Radius 12x8 EX unit manages the audio for a drive-in theater with a 25-foot screen. An additional Radius 12x8 EX handles audio for the museum’s large boardroom, which also is rented to corporations for video conferences. Included are four Dante-enabled paging zones within the museum, all managed by Radius DSPs so the system can be controlled from anywhere.

Another highlight is the interactive Wall of Sound.

“The Wall of Sound is wonderful,” enthuses Sanders. “It’s an exhibit about the relationship between cars and music. The Wall of Sound uses a Brown Innovation directed-energy speaker with an NEC 32-inch monitor and a motion sensor. As you walk by the exhibit, the system starts playing one of eight or nine songs and videos about cars. They range from the first rock ‘n’ roll car song, Jackie Brenston and Ike Turner’s 1951 ‘Rocket 88,’ through ZZ Top hits of the 1980s. The content is driven by a Brightsign interactive media player, and of course the audio is managed with a Radius.”

The World of Speed continues to create new exhibits, with systems integration by Delta AV. “Their team is very happy with the AV systems,” confides Sanders. “They’re stable, easily serviceable, reliable, and expandable. Symetrix Radius DSPs and Dante help make managing complex audio exhibits a lot easier, and of course, the World of Speed’s systems can be controlled very quickly.”