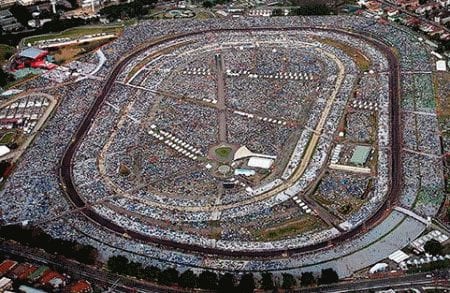 The Pope was conducting a Mass for 400,000 people at Randwick Racetrack during World Youth Day. The system required long runs between the 70 speaker towers and the front of house. The challenge was to build a cost effective audio networking solution that eliminated the ambient noise typically introduced by long cable runs. With limited set-up time, the designer wanted an easy to setup for a massive audience and deliver a high quality audio experience to everyone in attendance. The Church also wanted to to use off the shelf HP Pro-curve switches to reuse following the event for their IT network infrastructure.

Utilize the Dante networking solution in Dolby Lake Processors DSPs, the system was connected by a mixture of network bandwidth links. The backbone used 10Gb fiber, along with 100Mb end points.  Audio, Video, and Control was transported over a singly network, which eliminated $200,000 in cabling costs. While the system used 10 network switch hops, and Dante still maintained sub-millisecond latency.

The system was pre-tested using several networking technologies, but Dante was selected for its unsurpassed reliability and ability to deliver professional quality glitch-free audio quality.

Dante eliminated the problem of noise in the long cable runs to the 70 speaker towers across Randwick racecourse with its tightly synchronized sample accurate media transmission.