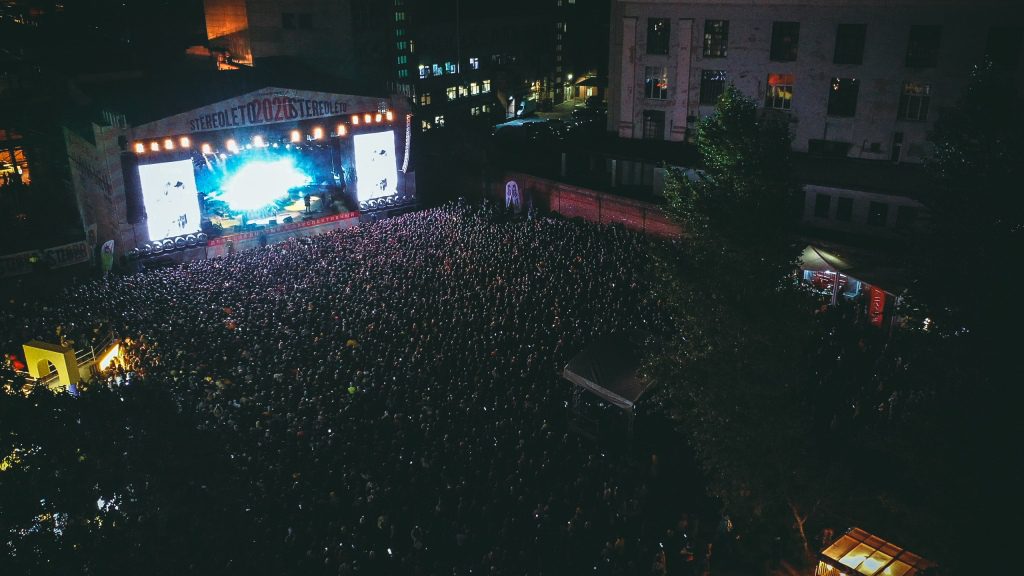 In a modern world, network technology is one of the key components of a show. Audio-over-IP solutions based on Dante protocol can be seen in a variety of places: from small concert venues, theatres to huge events with thousands of people.

Tell us a little about your company Zvukohod Rental Company, introduce yourself

Aleksei Mironov: I’m a production manager at Zvukohod Rental Company, based in Saint Petersburg, Russia. We provide sound systems and backline for the shows of all sizes, from small corporate events to large festivals. The company was founded at the beginning of the 2000s as a backline supplier and later expanded its activity to the field of PA systems. That was the moment when we started implementing networked audio technology.

For the last 10 years, we’ve been actively using Dante in various applications, which sometimes include even our custom solutions that use Dante as the core of the system. Our leading engineer, Valerie Gard, will talk about some cases.

What benefits do you find in using Networked Audio Solutions?

Valerie Gard: It’s faster, much cleaner and of course, the quality of the signal is higher. There are no extra connections, no XLRs, DI boxes, preamps. It greatly reduces the possibility of hearing  analog crackling from ‘somewhere in the chain’. Now it’s even possible to avoid ADC/DAC altogether along practically the whole signal path, e.g.: a laptop with Dante Virtual Soundcard, some Dante enabled digital desk, a Dante-AES converter for the amps, and that’s it.

What major projects have been implemented in 2020, despite the difficult conditions of the pandemic? A few words about the key equipment used in these projects. What systems were used?

Valerie Gard: 2020 wasn’t so rich for gigs, we all know why, but we could manage to catch some bright and important events that seem even brighter against the backdrop of the lockdown. The landmark of the year was the festival Stereoleto 2020, which happened in September, and as far as I know, it was the only traditional large-format festival during this time in Russia. It had an audience of about 10,000 people and some of the best artists that represent the Russian music scene. And of course, it involved some network-based audio technologies, where Dante played the major role.

The festival lasted 2 days, and each day several mixing desks were used. Those were: Digico SD12, Yamaha CL5, Waves LV1, Midas M32, Behringer X32. These desks fed the d&b audiotechnik amps over two d&b audiotechnik DS10 devices at each side of the stage. To mix the desks outputs, we used the self-made custom device that we call ‘Dante-mixer’, and it’s based on NIO xcel 1102 from Salzbrenner Media, four Dante AVIO 2ch analog input adapters, five Cisco SG300 with SFP optical ports, and all of them are combined in a 6-unit rack with a patch panel, lights, and a UPS unit. This thing has proven itself as an incredibly flexible device, which is capable of almost any routing and conversion between many protocols.

At the Stereoleto we used a hybrid star network topology with 2 centers at the FOH and the stage and an optical backbone cable between them with a couple of CAT6a cables for backup. Of course, full redundancy had been done.

Devices that worked at the front of house:

Valerie Gard: A couple of other interesting events that has happened this year are the show of the Hleb band and a large TV stream ‘Be with the city’, that included several mixing desks in different rooms all over the building and lots of stage connections for different artists.

Here are the network maps for those events.

Different rooms connected all together – have you used the existing network in the building? If yes – were there any problems with ‘getting into’ the existing IT environment?

Valerie Gard: In this situation, we worked in a building that didn’t have any ‘IT environment’, so we built it ourselves. Luckily, it wasn’t really difficult. We are always prepared for situations like that one. We have several custom Cat 6A looms that we carry in very convenient cases.

Aleksei Mironov: These looms are based on Cat 6A SF/UTP cables for mobile implementations. Each cable has an internal reinforced X-shaped central filler and an extremely robust outer PUR jacket.

These cables create the base of our own IT environment. The looms are assembled from five 100m cables with Ethercon connectors and one 3G6 mains cable, all placed into TechFlex Braided Sleeving. This helps us to lower set-up and tear-down times significantly. And we always have plenty of twisted-pair cables and power exactly in the place where we need it.

At the mentioned ‘Be with the city’ TV stream the total cable length used for Dante streams was about 1.4km.

‘Be with the city’

What are your challenges with Dante networking?

Valerie Gard: It’s always challenging to develop the network scheme in the first place. It’s important that the chosen configuration was reliable, fast to implement, had flexibility, and solved the tasks in a way that is convenient to everyone. So, most of the time it’s a brain-cracker that includes a lot of drawing, reading, and testing. And of course, sometimes it fails, but never on the venue. When we have some important and complex configurations to implement, we always run a bunch of tests and do a lot of homework. We connect everything at the warehouse and check all the possible situations.

At some point, we brought a DHCP server into the network, and it made lots of things easier. I’ve never been a fan of static IP addressing, because of a possibility of a human error (however, in some situations it’s warranted), neither have I ever appreciated link-local addresses of 169.254/16 range, because of bad control and some issues that emerge in larger networks. So, using a DHCP server gave us more control and stability of the network.

What challenges do you face in large festival venues, and how does Dante help you address those challenges?

Valerie Gard: The two biggest challenges we faced are mixing several desks that implement different protocols together and dealing with people who use Dante technologies in their stage setups. I’ve already described how we deal with the first problem – our NIO xcel 1102-based system helps us big time. We also own a Klark-Teknik DN9652 converter with Dante, AES50, and MADI cards as well as Digico Orange Box which also converts from MADI to Dante. With the use of Dante AVIO, we basically have all the bases covered.

The second challenge can be trickier. It’s seen quite clearly that despite the great convenience of using Dante in people’s setups, there’s still a lack of knowledge and understanding among them how the protocol works. And as far as a setup is kept simple and easy, there’s no problem with some shallow knowledge of the theory, but when it comes to large festivals and shows based on Dante, it can be tricky to implement people’s devices into the existing network as we don’t know what problems or misconfiguration they could have on their site. So, it’s all about negotiations and preparation. All the devices that people bring with them should be discussed and checked prior to the connection to the network.

Maybe you should also try Dante Domain Manager solution to build the secured Dante environment – how about that?

Valerie Gard: Dante Domain Manager is without a doubt a great tool to add to the existing flexibility of Dante. And what’s really important, it helps to monitor the existing network without any additional networking software. So yes, I believe, at some point, it should become a part of our work environment.

Dante AVIO in the box – can you share your experience with these adapters? How and where do you apply them?

Valerie Gard: We have four AVIO 2ch analog input adapters and use them to convert audio signals for the devices that don’t support Dante. That can be mixing desks, media players, feeds from Video-department, DJs, etc. The application can be really wide. We’re also thinking of buying some output-AVIOs.

So you would say these adapters are really ‘road’-ready, right?

Aleksei Mironov: Definitely yes! These adapters are designed very well and have strong, impact-resistant housing, and that is important when you use them in rental business or on tour. I even know a band from St. Petersburg, whose sound guys use 11 AVIO adapters as analog input- and output units. 5 output adapters are installed in their IEM rack providing monitor outputs and 6 input adapters are in use on stage for the keyboard, drum module, and various pads. This band is quite popular in Russia and tours a lot, and the sound guys say they had zero AVIO hardware failures during the last years.

Is there anything you’d like to be added to the AVIO product line or get some extra features?

Aleksei Mironov: As these adapters are very versatile and could be used in various applications, from stage to intercom- and talkback systems to name a few, it would be handy to have mic-level preamps in input adapters. A phantom power option would also be useful and I think both of these features will be appreciated by sound people.

It’s no coincidence that the talkback system was mentioned. Recently a friend of us, a sound tech from a popular band, asked if we could help him to build a talkback system for his FOH-to-Stage touring setup. As he had no spare analog inputs and outputs at the console and stage box, he wanted to add several input- and output-AVIOs to the existing setup, in order to be able to plug in several switched mics and shout-boxes. As it was expected in this case, he had no problems using output-AVIOs. When he tried to use recent input adapters with mics, he obviously got too low signal levels and high noise levels, which resulted in the purchase of two heavy and expensive external sound interfaces that met the needs of the band. If the input adapters with mic-level preamps would be available, they would definitely suit the band’s setup because of their small dimensions, weight, and durability.

Nobody really knows what to expect from 2021 – but we all hope for a better year. Is there something that you’d like to advise & wish for 2021 to the live-events industry people?

We’re in the middle of very difficult and tough times, so please stay healthy, sane and use your time wisely.