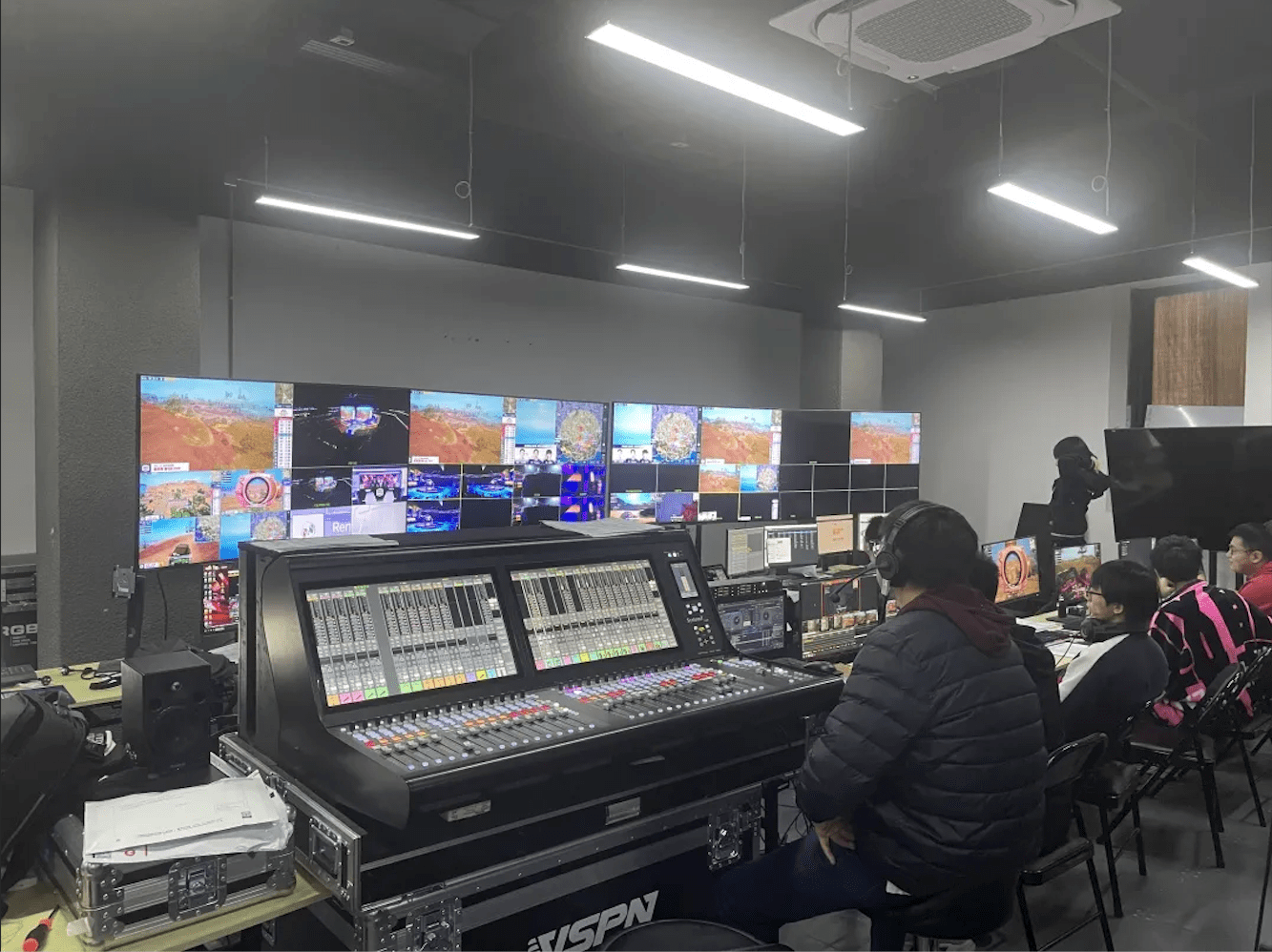 SYDNEY, Australia – August 31, 2021 – The Peacekeeper Elite League is the highest level of eSports competition for the videogame Peacekeeper Elite – the localized title of PUBG Mobile in the Chinese market. And while esports is a burgeoning market in the live production world, the production costs across these performances have traditionally been high due to the need for dedicated, on-site staff and expansive cable runs connecting many different video and audio feeds.

To mitigate this challenge, VSPN – a co-organizer of the Peacekeeper Elite League – recently experimented with a new way to host its events by relying on Audinate’s Dante for broadcast audio over a vast geographic distance.

On May 3rd, 2021, the first weekly final of the Peacekeeper Elite League 2021 S2 season was held in Chongqing Banan Huaxi Sports Center. Twenty professional teams from across the country gathered in the mountain city of Chongquing to compete.

While the idea of remote production had previously been considered too challenging due to latency issues associated with audio, the production team’s discovery of Dante changed their approach.

Used in more than 3,000 different products from more than 350 different manufacturers, Audinate’s Dante is recognised as the de-facto standard for digital audio networking. With near-zero latency and perfect synchronization, Dante offers uncompressed, multi-channel digital audio channels that can be routed over standard Ethernet networks. And, as proven by the Peacekeeper Elite League, it can also be effectively transmitted over hundreds of kilometers without latency issues.

Using Dante, the event’s commentators and production staff were able to largely work remotely in Xi’an – some 750 kilometers away from where the competition was taking place in Chonqing – with minimal audio latency. This setup enabled impressive cost savings by reducing the number of individuals on-site, minimizing traditional AV cable runs, and simplifying the workflow under an easy-to-manage Dante network.

In Chongqing, the event’s workflow uses an SSL System T S300-32 platform with a redundant T25 DSP engine for outside broadcast. An SSL Live L550 audio mixing console is also used with several Dante interface boxes to capture team voice chat. The Dante network located at the competition site in Chongqing is then connected to the studio in Xi’an through a dedicated network line. This allows for real time, remote audio production in the live broadcast with minimal latency.

Further, the team was able to add a robust level of features and management capabilities to the production using Dante Domain Manager.

“To realize the Dante remote production, we needed to solve signal transmission across subnets, network delay, and PTP clock synchronization,” said WangWei Xie, Technical Manager of VSPN “To solve most of this we added Dante Domain Manager to the system, which allowed us to group and isolate devices across subnets and plan device group attributes.”

Dante Domain Manager is network management software that enables user authentication, role-based security, and audit capabilities for Dante networks – all while allowing for a smooth expansion of Dante systems over any network infrastructure.

“In our system, Dante Domain Manager enables PTP V2 functionality for all Dante devices,” WangWei Xie said. “It locks the devices in the two places under their respective GPS clocks through the Assign Zone function and divides the domains of the Dante devices in the system for distributed management. It also allows us to activate the maximum latency value of the Dante devices, and opens enough buffer space to deal with the data transmission delay caused by the remote transmission of the dedicated network line.”

The workflow used a Leader LT4610 GPS master clock generator with the Dante systems in Xi’an and Chongqing. This enables the two locations to receive GPS satellite signals through an antenna and convert the signals into PTP, BB, and other clock synchronization signals.

“The result was that the system was stable, and the live event was a complete success,” WangWei Xie said. “We used Dante to realize the two-way real-time transmission of nearly 20 uncompressed audio streams through the dedicated network line. After three days of live broadcast and testing, the entire audio system had no failure. It perfectly achieved our expected results.”