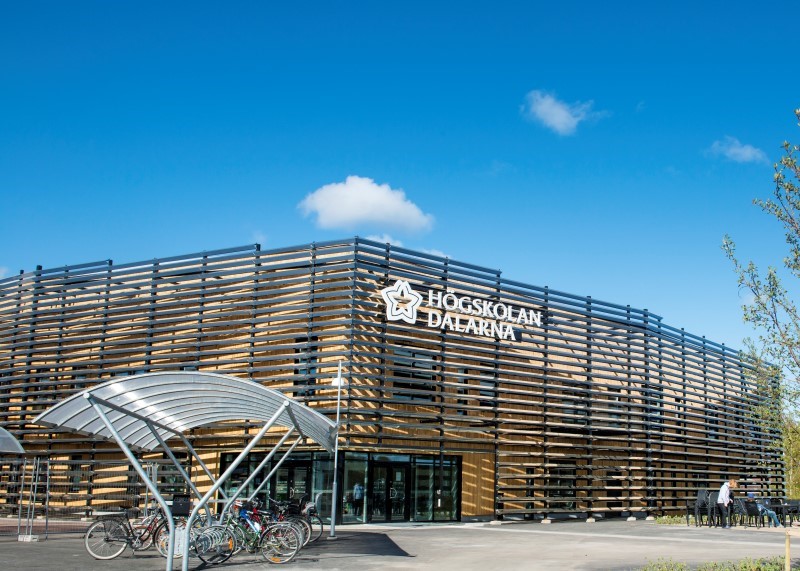 The faculty and students at Dalarna University use Dante and Dante Domain Manager for assuring an efficient, cost-effective, secure audio network for a diverse range of projects.

The media programs at Dalarna are recognized for their AV network distance productions. The university’s Mediehuset (The Media House) has worked with distance productions for several years and is regarded as one of the leading institutes of higher education in Scandinavia within this field. Each semester, The Media House takes on several remote-distance media productions as a way to expose students to AV network technologies.

In one scenario, live stage productions held in a theater near the University are broadcast to movie theaters in surrounding communities, greatly expanding the theater group’s audience. In addition to the video and audio being presented remotely — often by as far as 50 kilometers away, and to multiple remote theaters simultaneously — live AV audience feedback is brought back to the performers so they get the experience of performing for a full, live audience.

“What we do is rent a fiber connection between the remote locations and The Media House, and we connect the data network on location to our Dante network here. That way we just have stage boxes at the remote location,” explained Henrik Carlsson, an Instructor for the Sound and Music Production program. “And here in our studio we have our Dante enabled mixing console and it works the same way as if it were an all-in-house production.”

The Media House comprises the university’s music studio, radio studio, television studio, 25+ student film and music edit suites, and all things media related. Today, a Dante audio network is used extensively within The Media House to provide a fast, efficient, and reliable audio network for a wide range of production and learning opportunities.

In addition to theater projects, the team also produces a series of remote interviews and talk shows, collaborating with other local schools and their media students.

“We turn the student’s work into a remote television production by taking cameras and microphones to the site, with our team back here in the studio,” said Carlsson. “The remote aspect is that we don’t need to move an audio mixer and our entire control room team stays in house, just the cameras and the microphones need to travel.”

Carlsson and his students also use a similar system allowing for remote coverage of sports events, speeches and presentations, VIP announcements, and other news-type productions. Some events are shared live; others are edited and produced for posting through YouTube or Facebook. As a way to support and demonstrate technology for a regional conference on digital creativity, the team produced a live music collaboration over a fiber connection, between musicians in different locations performing live, together.

“The part that impressed me was the fact that every sound that was heard at the remote location, actually came back here to our studio first,” said Carlsson. “So, when the remote guitarist played his guitar, the line signal was converted with Dante, sent here to The Media House into the main computer, processed with amp simulators, overdrives, delays and similar things, and then returned as part of the PA mix back to the live venue. Because of Dante, we had no latency issues, and the musicians had a great shared experience even though they were over 100 kilometers apart.”

Carlsson added that he has a goal of keeping the Film and Television edit rooms and the Sound and Music edit rooms as similar as possible. If all the video suites are booked up, but there is a free suite on the audio side, then the film student can use a music edit suite, and vice versa. The Dante network enables this level of equipment sharing, and Dante Domain Manager provides the necessary management tools to make it viable.

Dante Domain Manager is network management software that enables user authentication, role-based security, and audit capabilities for Dante networks while allowing seamless expansion of Dante systems over any network infrastructure. Dante Domain Manager organizes a network into zones called “domains” that each have individual access requirements, making it clear and easy to know who can access any area of the system. All activity is logged, tagged and date-stamped so problems can be quickly identified and solved.

“We now have almost all of our infrastructure moved to a Dante network, and with around 400 students in The Media House at any given moment, Dante Domain Manager has become critical for protecting the network, setting permissions, and isolating subnets,” said Carlsson. “The way we have it set up now, it works very well with everything connected basically to the same switches that the IT department uses for bringing internet and intranet to everything. But we are very secure and protected from mistakes or malicious intent.”

Dante Domain Manager coordinates multiple subnets, allowing Dante audio to be used across networks of nearly any complexity or size. Dante Domain Manager enables audio to be plugged into any Ethernet jack, anywhere on campus, and route the audio data to where it needs to go. Once setup in Dante Domain Manager, authorized users of Dante-enabled devices do not have to perform any special configuration; Dante Controller provides the same easy-to-use experience no matter how large the network becomes.

As the team continues to explore more remote production possibilities, and ways to expand their audio network capabilities, Carlsson is now looking to use Dante with Dante Domain Manager to tie together the school’s three large lecture halls, to be able to expand the audience for large presentations. If a hall becomes standing room only, and additional coverage is needed, the team wants to be able to quickly send audio and video to another lecture hall for an overflow audience.

“Dante has allowed us to create a production network learning environment that is very reliable, flexible and easy to use. Our students benefit immensely from exposure of this technology,” said Carlsson. “And now Dante Domain Manager is allowing us to manage the system in a way that we can continue to expand and integrate more opportunities safely and securely. I look forward to seeing how we will apply Dante in the future.”