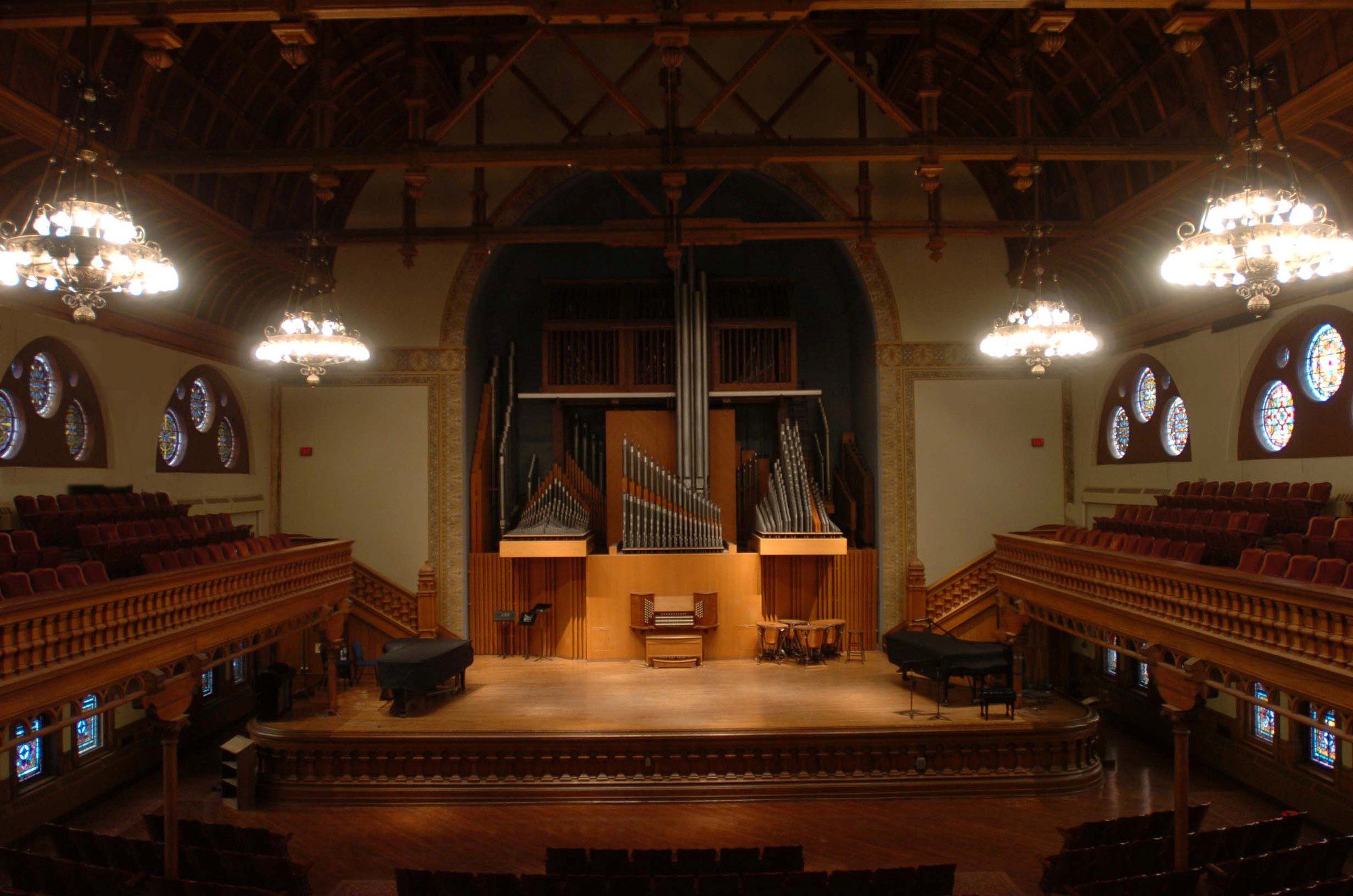 PORTLAND, Ore., Oct. 27, 2021 – The historic Setnor School of Music at Syracuse University was founded in 1887 and currently occupies one of the oldest facilities on campus, a building constructed in 1889. Recently, the prestigious school of about 300 students modernized and upgraded its department infrastructure, including a move from analog cabling to audio networking – a task completed with consideration to the historic significance of the building thanks to Audinate’s Dante.

Audinate’s Dante is the de-facto standard for digital audio networking and distributes hundreds of uncompressed, multi-channel digital audio channels via standard Ethernet networks with near-zero latency and perfect synchronization. Dante allows audio, control, and all other data to coexist effectively on the same network.

Dante also allows for low impact integration. Copper wire and XLR cables running between rooms at Setnor were installed sometime in the 1950s. The old analog cabling and break-out panels had become outdated, noisy, and inflexible. Dante was critical for the school during the upgrade as it offered a solution with minimal impact on the historic buildings on campus.

An Upgrade For Any Space

“With a building like this, we can’t just knock big holes in the walls and run more and more copper,” said Kevin Muldoon, an instructor and the Sound Recording Engineer at Setnor. “We’re replacing all the many runs of copper and XLR with about 200 feet of fiber optic cable to navigate through all the twists and turns to get signals from the auditorium to my office.”

Muldoon is also responsible for recording student performances for live streaming and archiving. With a Dante audio network connection in place, Muldoon and his team run all their microphone inputs through Dante-enabled Rupert Neve RMP-D8 eight-channel microphone preamps to the live board for mixing, recording, and live streaming.

Specifically, the XLR microphones in the auditorium connect to the RMP preamps, which convert the signals to the Dante network/fiber connection to an Avid MTRX audio interface in the studio, and then into ProTools for recording. A signal is also sent to back-up recorders via AES/EBU outputs. Soon, Muldoon plans to add a Dante network card to their Midas mixer, so the team will be able to work on projects concurrently — such as mixing for recording and live streaming performances simultaneously.

“Eventually, we want the Dante system to bring together our entire campus network, so we can connect to our off-site studio, as well as our separate jazz building and the Belfer Recording Studio, which is yet another separate building,” said Muldoon. “We want to get to a point where a complete Dante audio network will allow seamless integration between all of these locations.”

“It’s cool that I’m an instructor because I can expose students to new audio network technology as well as the analog way of doing things, and the benefits of digital audio really sink in when you do that,” said Muldoon. “A digital network is so flexible and easy and can do so much more than analog — and you never have to worry about AC hum or grounding problems or dragging around a big audio snake.”

To help expose his students to all aspects of an audio production system, Muldoon teaches a class on audio electronics where the students build DI boxes and preamps and learn how to solder and repair basic equipment. He recently began having students build ethernet cables.

“It’s no doubt Dante will play a big part in our future as well as the industry,” added Muldoon. “Either in recording studios or across a school of music campus, Dante should be the backbone of the audio production that goes on.”